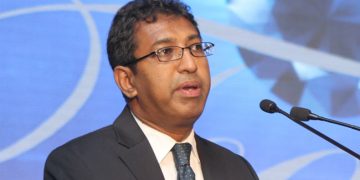 Aug 18 (NIA) – Sri Lanka has invited American businesses to invest in the island nation, in a move seen as expanding engagement with the US on multiple areas of cooperation, a Foreign Ministry statement said here on Thursday.

Deputy Foreign Minister, Harsha De Silva, who held bilateral discussions with US officials, briefed them on the recent developments in Sri Lanka with respect to reconciliation as well as economic and investment policy reforms.

Recalling the Sri Lankan government’s twin policy objectives of reconciliation and development, the Deputy Minister reiterated his government’s aim to ensure a peace dividend for the people, for the country to progress toward enduring peace and development.

The statement said that during discussions, the U.S. government officials acknowledged the vast progress Sri Lanka had made since the new government came into office last year.

“The regular visits by high level U.S. officials to Sri Lanka mirror the interest and the potential for multifaceted engagement with the United States in the burgeoning bilateral relationship,” the Foreign Ministry said.

It added that ongoing cooperation with Sri Lanka under the Millennium Challenge Corporation (MCC) since December 2015 was yet another important element of U.S. bilateral development assistance to Sri Lanka.

“It was reiterated that U.S. engagement in Sri Lanka through its development agencies such as United States Agency for International Development (USAID) and MCC will continue to evolve to assist Sri Lanka in meeting its needs and priorities, both in short and long-term,” the Foreign Ministry said.