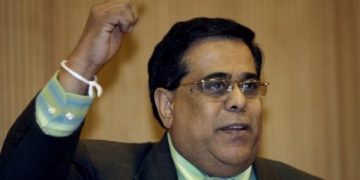 Colombo, September 30 (NIA) Nimal Sripala de Silva, Senior Vice President of the ruing Sri Lanka Freedom Party (SLFP) and a cabinet minister, has appealed to the Northern Province Chief Minister C.V.Wigneswaran not to raise demands which will encourage Tamil extremists in the North and Sinhalese extremists in the South to come to the fore and stop the on-going post-war reconciliation  process.

Addressing the media here on Thursday, de Silva said that it is time the leadership of the Tamil National Alliance (TNA) reined in Wigneswaran who is but a TNA appointee.

Addressing the “Ezhuga Tamizh’ (Tamils Arise) rally in Jaffna on earlier this week, Wigneswaran called for the removal of the Sri Lankan army from the Northern Province, for a stop to the grant of lands and living sites to Sinhalese from the South and also an end to the erection of Buddha’s statues in the North.

He protested against the formation of a committee of Central government ministers to oversee the re-settlement of Muslims and Sinhalese in the North.

The voicing of these demands and the mobilization of thousands of people for a rally to press these demands, have alarmed Tamil and Sinhalese moderates.

The moderates see such radicalization as a ploy to scuttle the Sirisena-Wickremesinghe government’s efforts to draw up a new constitution ensuring national solidarity based on ethnic reconciliation. They also fear that if such an extremist trend continues, the extremists of both sides will dominate the political scene to the detriment of the moderates, national unity and ethnic amity.

Following the “Ezhuga Thamizh” rally,  the Sinhala-Buddhist extremist Budu Bala Sena organized a Sinhalese rally in Vavuniya.One of the cabinet ministers Mahinda Samarasinghe said that the Sri Lankan President has the powers to sack a Provincial Council if it became unruly and started making wild demands.

The Ezhuga Tamizh rally, organized by the Tamil People’s Council (TPC), whose head is Wigneswaran, was attended by a host  Tamil political parties, including some constituents of the Tamil National Alliance (TNA).

Minister de Silva demanded that Wigneswaran withdraw his controversial statements. He also  condemned a section of the Tamil media for propagating the lie that colonization that took place during D.S. Senanayake’s premiership is now continuing under President Maithripala Sirisena’s rule.

“We urge TNA leader Sampanthan and other constituents of the TNA to take punitive action against the Northern Chief Minister,” de Silva said.

TNA Not Party To Wigneswaran’s Stand

The TNA’s spokesman M.A.Sumanthiran has said times without number than Wigneswaran’s mobilization of the masses to give a sharp edge to the Tamil campaign, is inopportune as the government and parliament are seriously engaged in formulating a new liberal constitution for the country.

The Democratic Peoples’ Front leader and minister, Mano Ganeshan, has said that instead of having a rally asking the Tamils to rise, there is a need for a rally  asking all Sri Lankans to rise and work for the betterment of all living in the island.