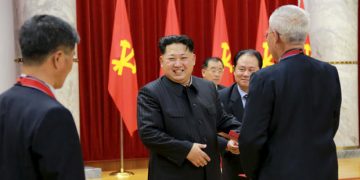 North Korean leader Kim Jong Un attends a ceremony to award party and state commendations to nuclear scientists, technicians, soldier-builders, workers and officials for their contribution to what North Korea said was a succesful hydrogen bomb test, at the meeting hall of the Central Committee of the Workers' Party of Korea (WPK) in this undated photo released by North Korea's Korean Central News Agency (KCNA) on January 13, 2016. REUTERS/KCNA ATTENTION EDITORS - THIS PICTURE WAS PROVIDED BY A THIRD PARTY. REUTERS IS UNABLE TO INDEPENDENTLY VERIFY THE AUTHENTICITY, CONTENT, LOCATION OR DATE OF THIS IMAGE. FOR EDITORIAL USE ONLY. NOT FOR SALE FOR MARKETING OR ADVERTISING CAMPAIGNS. THIS PICTURE IS DISTRIBUTED EXACTLY AS RECEIVED BY REUTERS, AS A SERVICE TO CLIENTS. NO THIRD PARTY SALES. SOUTH KOREA OUT. NO COMMERCIAL OR EDITORIAL SALES IN SOUTH KOREA TPX IMAGES OF THE DAY

Sept 15 (NIA) – The Sri Lankan government, on Thursday, condemned the recent nuclear test carried out by the Democratic People’s Republic of Korea (DPRK) and called upon them to abide by its international obligations.

“Sri Lanka notes with concern that this is the second such test to be carried out by the DPRK this year,” the Foreign Ministry said in a statement.

“Sri Lanka calls upon the DPRK to abide by its international obligations and refrain from any action which would compromise peace and stability in the Korean Peninsula.”

Pyongyang said on Friday that it successfully carried out an explosion test of nuclear warhead that can be mounted on ballistic missiles.