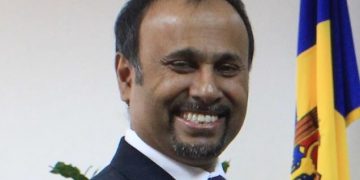 Sri Lanka to bring back notorious ex diplomat from Dubai

Sri Lanka to bring back notorious ex diplomat from Dubai Weeratunga was reportedly stopped at the Dubai international airport when he tried to leave for the United States. Police want to bring him back to Sri Lanka to face criminal charges over the 2006 MiG purchase deal.

“Our diplomatic mission and the Foreign ministry are currently working with the Dubai authorities in this regard,” the Minister said, addressing a public meeting in Mawarala, in the Matara district.

He said Weeratunga was trying to leave Dubai using a diplomatic passport which the Sri Lankan authorities had withdrawn.

“The Police alerted several countries to arrest Weeratunga. As a result, the former Sri Lankan Ambassador to Moscow was arrested in Dubai on Sunday,” he said. (EconomyNext)