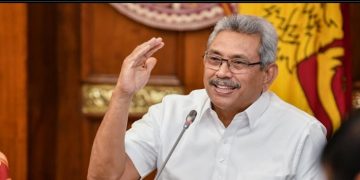 Colombo, April 17 (newsin.asia): In the Global Response to Infectious Diseases index, Sri Lanka and President Gotabaya Rajapaksa have been ranked ninth, said a note from the Sri Lankan President’s Media Division on Friday.

This is an index designed to rank the efficiency and effectiveness of the leadership of the country and the preparedness of its health system to combat COVID 19, the note said.

Describing the current situation in the island nation as regards the fight against COVID-19, the current problems and achievements and future prospects, the note said: “While it is  clear that Sri Lanka has been successfully containing and controlling the COVID 19 threat, it is also clear that the crisis is far from over.”

“We are still fighting with an invisible enemy that we have not yet understood fully. The fact that this is a global pandemic further complicates the issue. Staying safe while rescuing our economy from a changing world are the challenges before us.”

“Still, we have reasons to be optimistic. We have already begun our return journey to normalcy. If the current progression continues, by mid-May schools and universities can reopen for the second term. It is hoped that the parliamentary elections too could be held before June, allowing people to exercise their franchise to select the government that they see fit.”

“At a recent meeting with the Secretaries to Ministries, President Gotabaya discussed the need to ease the curfew to allow the public and private sectors to return to work without undue impediments. The need to protect the local economy was emphasized. Ministries were instructed to provide the necessary support to the agrarian and fisheries sectors as well as other businesses to recover. The President also advocated exploring business avenues to create new economic trends.”

“The Administration is clearly not alone in the war against this deadly virus. People from across the Sri Lankan society have risen to the challenge. Many young adults have found novel solutions to pressing problems. They have made contributions in manufacturing health and medical equipment locally that are otherwise very expensive if imported. Social service activities to help the vulnerable have been initiated.”

“The special COVID 19 Healthcare & Social Security Fund that was initiated by President Gotabaya on March 23 with LKR 100 million from the President’s Fund, has already got LKR 703 million.”

“From the inception, contributions have been pouring in from individuals and organizations to this special Fund’s account No: 85 73 73 73 at Bank of Ceylon. On April 1, Akbar Brothers (Pvt) Ltd contributed LKR 50 million. This took the balance to over LKR 242 million. A week later, among many contributors was retired teacher Mr Sarath Kumara Gurusinghe who donated his entire month’s pension. Mr Uyanahewage Ashoka, whose vision is impaired in both eyes, gave LKR 500,000.”

“The committee is tasked to utilize this Fund for the following:  Invest in and purchasing medicines and testing kits as well as increasing healthcare capacities; Ensuring the health and safety of those in the health sector and in the essential services; Meeting the financial needs of children, women, low income earners, elders, physically challenged and other vulnerable sectors; Integrating the public health systems, rural and remote dispensaries, testing and treatment centers and health care systems to reduce the risk of infectious diseases; Supporting the health sector through innovation and production of indigenous medicines by using the resources, knowledge and skills in the country; Promoting in the global market the protective clothing and hygiene products developed through our knowledge and experience in the medical and scientific fields; and finally ,conducting media and educational campaigns to promote a healthy lifestyle centered on our traditional values and organic food.”

“In the meantime, the Chief Incumbent of the Lankarama, Venerable K Ganarathana Thero, who is chairman of the Mahakaruna Buddhist Association in Singapore along with the Sri Lankan High Commissioner Shashikala Premawardena and the Chairman of Humanity Matters Association Ong Keng Yong handed over to the Presidential Secretariat, LKR 10 million worth of medical equipment to combat COVID 19 in Sri Lanka.”

“On March 10 the first Sri Lankan was found to be infected with COVID-19 virus. As a precautionary measure  vacations for schools and the universities, normally due in April, were advanced to March 13. The special public holiday given soon after was turned into an all-Island curfew on  March 20. Everyone was asked to work from home except those in essential services, the agrarian sector and the media.”

“Naturally this disrupted the economic machinery and many business processes were stalled. Sectors like tourism that were just recovering after last year’s Easter Sunday massacres were seriously affected.”

“The Administration however kept a very steady hand. The State machinery continued to support vulnerable sections of society including low income families, samurdhi beneficiaries, pensioners and the differently-abled. They were given an additional LKR 5,000 as a means of financial support. The State also bought 900,000 kg of fresh produce from the farmers.”

“At the same time, non-essential exports were banned. An appeal was made to the Sri Lankan expatriate community to remit foreign currency to ease the pressure on the LKR. Economic activities have been allowed to resume in a controlled fashion.”

“As citizens, Sri Lankans are responding very positively. Many corporate top executives have decided to take pay cuts instead of laying off their employees. The Rupee has already started to recover because of this collective effort. On April 15, it appreciated to LKR 195.49 against the USD.”

“It is very clear that we are walking on a tightrope. Balance is of utmost importance to meet the current challenges as well as the ones ahead. The people have shown commitment to the goal and the courage to achieve it. The State machinery from security to health and social services have complemented the political will. Victory over COVID-19 deadly virus is well within our reach.  It is up to all of us not to let the victory slip from our grasp.”