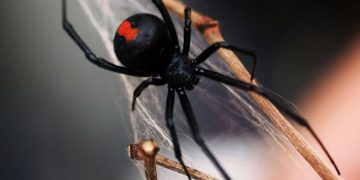 Sydney, Sept 28 – A 21-year-old Australian tradesman has been bitten by a venomous spider on the penis for a second time.

The man was using a portable toilet on a Sydney building site on Tuesday, when he suffered a repeat of the incident five months ago.

Jordan, who preferred not to reveal his surname, said he was bitten on “pretty much the same spot” by the spider.

“I’m the most unlucky guy in the country at the moment,” he told the BBC.

“I was sitting on the toilet doing my business and just felt the sting that I felt the first time.

“I was like ‘I can’t believe it’s happened again.’ I looked down and I’ve seen a few little legs come from around the rim.”

He said that being bitten the first time had made him wary of using portable toilets.

“After the first time it happened I didn’t really want to use one again,” he said.

“Toilets got cleaned that day and I thought it was my opportunity to go use one. Had a look under both seats and then I sat down did my business. Next thing you know, I’m bent over in pain.”

“Ill be holding on”

The tradesman said he was not sure what type of spider bit him this time.

One of his colleagues took him from the worksite in north-west Sydney to Blacktown Hospital – although many of his workmates were quick to see the lighter side of the situation.

“They got worried the first time,” he said.

“This time they were making jokes before I was getting in the car.”

The hospital declined to discuss the matter, citing patient privacy.

Jordan was released from hospital and said he expected to return to work soon but was unlikely to be using the on-site toilet.

“I think I’ll be holding on for dear life to be honest,” he said.

The redback spider, closely related to the black widow spider, is distinguished by a long red stripe on its abdomen.

Although there are recorded cases of deaths from redback bites, none have occurred since the development of antivenom in 1956.