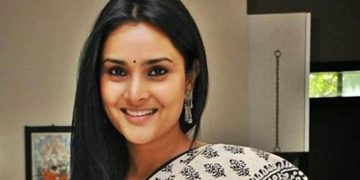 Bengaluru ,August 23 (NIA): South Indian actress and a former Member of the Indian parliament, Divya Spandana also known as Ramya, has said that she will not apologize for saying that Pakistan is “not hell” as the Indian Defense Minister Manohar Parrikar says, and that Pakistanis, as a people, are as good and hospitable as Indians are.

Facing a case of “sedition” filed by a local lawyer for saying this, Ramya wrote in the Indian Express that she will not stop working for good neighborliness among the estranged countries of South Asia.

This is what she writes: “Yesterday a friend of mine asked me w hether political parties in India hold a stockpile of large, printed posters of politicians from rival parties. He had seen TV channels in Karnataka air scenes of demonstrations in which certain right wing groups loudly and theatrically alternated between burning pictures of me and stomping on them. One amusing frame had a number of grown men flipping slippers at my poster!

The reason I had provoked the ire of self-proclaimed ‘nationalists’ in saffron was that I had disagreed with Defense Minister Parrikar’s pronouncement that going to Pakistan is akin to a visit to hell. I had just returned from a visit to Islamabad and can safely report that what I found was not hell but a country that is home to people just like us, who happen, sadly, to be ruled by a regime that does not inspire confidence.

It is understandable to hold Pakistan’s military and government to account for their conduct, but when civil society in our neighboring land holds out a hand of friendship to us, I think it is essential we welcome the effort.

I was in Islamabad to speak at the first SAARC Youth Parliamentarians’ Conference, attended by a cross section of young South Asian politicians from across party lines. Most importantly for me, it was a forum with a number of extremely inspiring Pakistani women with whom I, as a woman in politics, saw an opportunity to build a friendship that could tomorrow join us in achieving common goals in bringing our countries closer.

While it is easy to denounce conversation with the Pakistani establishment, a conversation with ordinary Pakistanis is crucial regardless of whether or not our governments are on good terms. What these self appointed ‘nationalists’ want is to drum up hysteria and ensure that we never find solutions to longstanding problems. Theirs is a patriotism that begins and ends at making noise on the street—after all it is easy to gather a horde of bullies and demonstrate. It may get them prime time TV attention, but peace building requires a little more nuance and effort.

It is my conviction that to serve my country, which I do with commitment and pride, what is needed is the building of enduring bridges with our neighbours that will pave the way to a better world and a better future. The people gathered in Islamabad are a part of the solution, and to me joining this effort is a contribution in the right direction, no matter how many posters of me are burned by mobs of men who know no better.

With a complaint of sedition filed against me, I stand by my remarks that Pakistan is not hell and I see no reason to withdraw or apologize for it. It’s ironical that in a country where people get away with crimes such as a murder, those that seek peace are targeted.

The complaint has sought to have her booked under IPC sections 124(a) (sedition), 344 (wrongful confinement for ten or more days) and 511 (punishment for attempting to commit offences punishable with imprisonment for life or other imprisonment). Advocate K Vittala Gowda filed the complaint before Somwarpet Judicial Magistrate First Class (JMFC) court, which yesterday admitted it and posted it for hearing on August 27.

In the complaint, Gowda accused the multi-lingual actress of “insulting” India and “provoking” people by appreciating Pakistan which is a “traditional enemy of India.”

Recently a sedition charge was filed against Amnesty International India by the police, after anti-national and anti-Army slogans were allegedly raised at an event on Kashmir organized by it here recently.

The issue turned into a major political slugfest with BJP, including several union ministers, accusing Congress of “sympathizing with supporters of terrorists” and giving a clean chit to Amnesty International.

Developing cold feet the Karnataka Home Minister G Parmeshwara denied giving a clean chit to Amnesty International and said the law would take its own course on the issue.

Earlier  a sedition charge was framed against the Jawaharlal University Students Union leader Kanhaiya Lal, which became very controversial .The government  acknowledged that the definition of “sedition” is “very wide” and said it is being reviewed by the Law Commission.

The sedition law, section 124A of the Indian Penal Code (IPC), is a colonial-era law that was once used against political leaders seeking independence from British rule. Unfortunately, it is still often used against dissenters, human rights activists, and those critical of the government.

The Indian Sedition law allows a maximum punishment of a life term in prison. It prohibits any signs, visible representations, or words, spoken or written, that can cause “hatred or contempt, or excite or attempt to excite disaffection” toward the government.

This language is vague and overbroad and violates India’s obligations under international law, which prohibit restrictions on freedom of expression on national security grounds unless they are strictly construed, and necessary and proportionate to address a legitimate threat. India’s Supreme Court has imposed limits on the use of the sedition law, making incitement to violence a necessary element, but police continue to file sedition charges even in cases where this requirement is not met, observers the Bew York-based Human Rights Watch.

Members of the Rajya Sabha (Upper House of the Indian parliament) demanded that it the law be scrapped as it is a colonial legacy and a “relic” of British rule.

“Anbody, who speaks against the government can be booked under sedition law. Amendments have been suggested because the definition is very wide,” said the Minister of State for Home, Kiren Rijiju.

Home Minister Rajnath Singh said that once the Law Commission submits report, he would convene an All-Party Meeting to consider its recommendations.