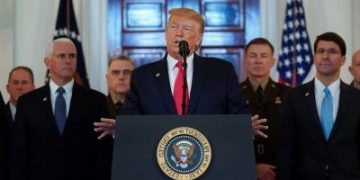 Thanks to the deep concern expressed by his Western allies, Trump pulled himself back from the brink and said publicly on January 8 that he would not wage war against Iran The economies of South Asian countries, including that of Sri Lanka, would have suffered grievous damage if US President Donald Trump had actually gone to war with Iran as he threatened last week.

But thanks to the deep concern expressed by his Western allies, Trump pulled himself back from the brink and said publicly on January 8 that he would not wage war against Iran. In an address from the White House, Trump said that the US does not necessarily have to respond militarily to the Iranian missile attacks on military bases in Iraq.

Trump claimed that “Iran appears to be standing down, which is a good thing for all parties concerned and a very good thing for the world,” wanting the  world to believe that it was Iran which backed out first. On Iran’s missile attack on US positions in Iraq, Trump said that no Americans were killed, while Iran said more than 50 servicemen were killed.

To cover up his winding down, Trump said that he “will immediately impose additional punishing economic sanctions on the Iranian regime,” though he did not spell out the sanctions. Trump again vowed that he would not allow Iran to obtain nuclear weapons and urged world powers to quit a 2015 nuclear accord with Iran that Washington abandoned in 2018 and work for a new deal. Iran has rejected new talks on a nuclear deal though its Foreign Minister tweeted: “ We do not seek escalation or war, but will defend ourselves against any aggression.”

As a result of Trump’s backing out, there is no immediate threat to 52 Iranian sites, including ones that are important to the country’s culture. But continued and intensified US economic sanctions will stymie Iran’s economic development and hinder its relations with countries tied to the US such as Pakistan, India and even Sri Lanka.

lf war an Iran-US war had actually broken out, India would have been asked by the US to permit the American military to operate out of Indian air force and army bases along the border with Pakistan under the Logistics Exchange Memorandum of Agreement (LEMOA) between the two countries.

In the recent India-US summit involving the Foreign and Defense ministers of the two countries, the US side expressed eagerness to activate LEMOA.  With Asian Islamic countries, including Pakistan, unwilling to be any part of any America-led military action, the US would have been constrained to seek Indian cooperation.

India’s US-friendly Prime Minister Narendra Modi would then have been on the horns of a dilemma. While wanting to help his friend Trump he would have to face heavy flak at home where he is no longer seen as a political messiah or a harbinger of economic development. He would be reminded that his US-friendly policy has not led to gains for India. The US has not lifted restrictions on Indian techies’ entry and on the entry of Indian manufactured goods into the US. But the US has got entry into the Indian arms market.

War in the Middle East would have meant higher fuel prices.And that could have had a rippling effect on the already weak Indian economy. Because of US sanctions on Iranian oil, India had had to import oil from the US and Saudi Arabia at a higher cost. Iran was hoping to sell more than 500,000 barrels per day (BPD) to India and had offered almost free shipping and an extended credit period to boost sales. But Indian Prime Minister Modi chickened out under threat of US sanctions.

One of the publications quoted Brig (Rtd) S.K. Chatterji as saying that if Iran had disrupted oil shipping through the Strait of Hormuz, through which 20%  of the global oil traffic passes, it would have  seriously affected life East of Suez.

Iran had emerged as the single largest importer of Indian tea, taking over 50 million kg in 2019 , which is about 10% India’s total tea exports. The development of Chabahar port in Iran which India had undertaken to do (to get access to Central Asia avoiding Pakistan) would have been further hampered.

According to “South Asian Monitor”, Indian security planners see Iran as a bulwark against the ISIS/Al Qaeda type Islamist militancy. Many in New Delhi are worried over the assassination of Iranian Gen.Qassem Soleimani by the US because they fear a return of the Daesh/ISIS and Al Qaeda which he was fighting tooth and nail in Syria and Iraq.

Having reaped the horrible consequences of siding with the US in the latter’s war against the Soviets and the Taliban in Afghanistan, Pakistan is naturally wary about getting into a similar situation now.

“We’re clear that Pakistan’s soil will not be used against any other state, and nor will Pakistan become a part of this regional conflict,” Foreign Minister Shah Mehmood Qureshi told the upper house of parliament in a policy statement. “Pakistan has taken a clear stance that Pakistan doesn’t endorse any unilateral action,” he added.

Pakistan is grappling with a severe economic crisis and is surviving with IMF bailouts and Saudi largesse. War in the region with its indirect involvement will not allow Pakistan to get out of the economic mire. It is feared that if India cooperates with the US on account of LAMOA, and given Modi’s antipathy to  Pakistan, the security situation on Pakistan’s eastern border will only worsen.

Pakistan is also worried that any armed conflict with Iran will affect the peace process in Afghanistan where the US will find it harder to make a deal with the Taliban, which is a Pakistani ally. Pakistan desires an Afghanistan in which there is peace and stability, with the friendly Taliban firmly ensconced in power.

Like India, Afghanistan is interested in the development of the Chabahar port in Iran as it gives the landlocked country access to the sea. The US, which controls Afghanistan through the Kabul regime, had tacitly accepted the development of a supply line through Chabahar to help India develop commercial links with Afghanistan by-passing hostile Pakistan. But this plan will go up in smoke in Chabahar is flattened in a US-Iran war.

Afraid of being dragged into the US-Iran conflict, President Ashraf Ghani of Afghanistan tweeted: “The Islamic Republic of Afghanistan is gravely concerned about a possible increase in violence in the region. In my telephone conversation with the US Secretary of State, I once again emphasized that Afghan soil must not be used against a third country or in regional conflicts.”

The other consequence could be continued but undesirable presence of US troops in Afghanistan. The US military might not want to leave the Bagram and Shindand Air Bases.

Iran has also been a major development partner of Sri Lanka since the 1960s. Iran constructed the Sapugaskanda Oil Refinery, the country’s largest. But US sanction has hampered further cooperation with Iran in this field.