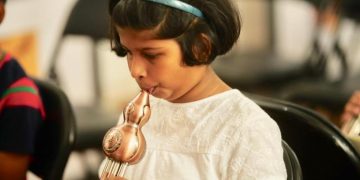 by Tang Lu and Jamila Najmuddin

Though very young, Thenumi was concentrating on her teacher, Tang Ruilin’s words very carefully, when he was instructing her at the Chinese Cultural Center in Colombo.

Tang told Xinhua that Thenumi was one of the best among the 20 students who had been chosen for the two-week course.

“Thenumi is the best in the training class. Because of her hard work, she has made rapid progress,” Tang said.

No wonder then that Thenumi did what none of the other students did at the closing ceremony. She suddenly went on stage and made a moving statement.

“Thank you for your patience, teacher Tang. The classes not only gave me a new musical experience but also let me find a future goal, to go to China,” she said.

As the Xinhua reporter approached the Chinese Cultural Center on Independence Avenue, the plaintive sound of the Hulusi flute filled the air. Students were playing the Chinese traditional songs, “Marriage Oath” and “Sweet Honey” in Tang’s class.

The Hulusi is a cucurbit flute. It is a free reed wind instrument native to China. It is held vertically and has three bamboo pipes that pass through a gourd wind chest.

Interestingly enough, the class at the cultural center had students from all age groups. Most of the students had no prior knowledge of playing instruments.

Regardless of the age and the musical background of his students, Tang patiently explained the intricacies of playing the Hulusi in ways suited to each category.

A month ago, when the Hulusi flute training class was announced by the Chinese Cultural Center through the local media, more than 3,000 people signed up in five days. But due to the limited capacity and the availability of just one teacher, the “first come, first served” basis was adopted and some 20 students were enrolled for the free course.

On opening day, Tang gave a brief introduction to the history of the instrument and the basic method of playing it.

He played the famous songs “Beautiful Golden Peacock” and “Fernleaf Hedge Bamboo under Moonlight”, which was apparently a great encouragement for the students to learn to play the Hulusi flute.

Rangana Athauda, a Sri Lankan bamboo flautist, though having never heard of the Hulusi flute, was keen on learning to play it.

“I want to know more about traditional Chinese instruments. Hulusi is a wind instrument, which is not too difficult for me to master,” he said.

Tang figured out a way to teach students of various age groups and musical backgrounds.

“I divided the students into three groups according to their age and understanding and mastery of the instrument. I checked the capability of each student before taking a class. I would then individually speak to them and correct their mistakes,” he said.

Teaching a group of foreigners to play Chinese instruments in a foreign country was an unprecedented experience for Tang. Watching students who never knew what the Hulusi flute was, master the basics in only two weeks, Tang felt very happy.

Wijeratne and Sheriff are students of Chinese language at the Kelaniya University based in Colombo. They said, “If we want to learn Chinese well, we must learn more about Chinese culture. Learning to play the Hulusi flute will help us understand China.”

Le Liwen, the Director of the Chinese Cultural Center, said that the Hulusi flute should become a medium to introduce Chinese culture to Sri Lankans.

“Folk music is an important part of Chinese culture. The purpose of this training course is to enable Sri Lankans to better understand, experience and feel Chinese culture through different art forms,” Le said.

(The featured image at the top shows seven year old Thenumi, one of the brightest students. Photo: Tang Lu)