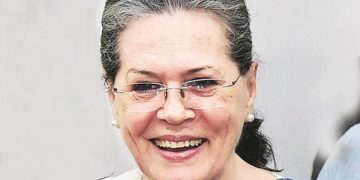 New Delhi, August 10 (The Quint): After a long second meeting, the Congress Working Committee (CWC) unanimously elected Sonia Gandhi as the interim president of the Congress, on Saturday, 10 August. The decision was announced by senior party leader Ghulam Nabi Azad after Rahul Gandhi once again refused to take back his resignation from the post of the party head.

Earlier during the day, after the first round of consultations held by the CWC to arrive at a consensus party president, Spokesperson Randeep Surjewala had said that Rahul Gandhi refused to withdraw his resignation, even though the committee spoke in one voice and asked him to continue as party president.

Surjewala had further added that the CWC, in accordance with the wishes of Rahul Gandhi, has divided itself into five zonal groups, each of which will meet today to discuss the probable names for party president. Their views will then be discussed at the second round of the CWC meeting to be held at 8 pm today.

Those present in the meeting include Randeep Surjewala, KC Venugopal, Harish Rawat, Meira Kumar and Ahmed Patel, among others.

Notably, the committee is faced with the task of appointing the new party president who will take over from the Gandhi scion, who quit in May, owning responsibility for the party’s national election debacle.

The CWC may also form a panel of senior members to look for the new chief, PTI reported on Friday.

Reports on Friday suggested Mukul Wasnik, a non-Gandhi, is likely to become the interim party president for the first time in twenty years.

The 59-year-old former minister, who has worked in the tenure of PV Narasimha Rao and Manmohan Singh’s governments, is expected to lead the party at least till the organisational elections, NDTV reported. We(She and Rahul Gandhi) will not be a part of the consultation process(to decide next party chief) and that is why we are leaving.

Meanwhile, Senior Congress leader and Rajasthan Chief Minister Ashok Gehlot on Saturday ruled himself out of the race for party chief, reported PTI.

Speaking to reporters after the Congress Working Committee (CWC) meeting in New Delhi, he said, “I am not among those leaders who push their names for the party president’s post. My opinion in this matter is known to all.”

Meanwhile, party leader Abhishek Singhvi said on Friday that any further delay in the selection of the new chief is not an option.

“On Saturday, a consensus builder party President of Congress must be selected. Slightest delay is not an option,” Singhvi said on Twitter.

On Sunday, 4 August, Congress general secretary organisation K C Venugopal had announced that the next Congress Working Committee Meeting will be held at 11 am on 10 August at the AICC headquarters.

Earlier, Congress General Secretary Priyanka Gandhi Vadra had said that she should not be considered as a replacement for her brother as the party chief.

Her comments had come amid speculation hinted at by senior Congress party leaders like Captain Amarinder Singh and Shashi Tharoor. Speaking to news agency PTI on Sunday, party’s senior leader Karan Singh said that Priyanka would be a “unifying force” and will enthuse cadres if she takes on the mantle.

Last month, news agency IANS reported that Rahul too is firm on not having a member of the party’s first family as the working president.

(With inputs from PTI and NDTV)