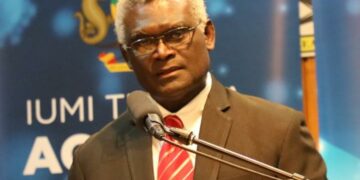 Beijing, September 28 (Global Times): Addressing the 76th Session of the UN General Assembly of the UN that Solomon Islands Manasseh Sogavare, Prime Minister of the Solomon Islands, said his country being party to the 1985 the South Pacific Nuclear Free Zone Treaty would like to keep the region nuclear free and put the region’s nuclear legacy behind it.

“The ocean remains the life blood for our survival and would like to work with everyone in keeping it blue and healthy,” Sogavare said.

He was referring to the the US, UK, Australia bid to bring in nuclear submarines to the Pacific Ocean through the AUKUS agreement aimed at curbing China’s activities in the Indo-Pacific region.

Drawing attention to the Solomon Islander’s speech, the Chinese Foreign Ministry Spokesperson Hua Chunying told the media here on Tuesday that “many people may not know that the South Pacific region is the worst area affected by nuclear pollution.”

“The US carried out 67 nuclear tests in the Marshall Islands between 1946 and 1958, which caused irreparable damages on inhabitants’ health and the ecological environment,” Hua said.

“The US has dumped nuclear waste into the Pacific Ocean 63 times, causing a large raise in the incidence rate of cancer, leukemia and birth defects in newborns and other illnesses among those living in the Marshall Islands,” Hua noted.

“The concentration of soil samples taken at the Bikini Atolls islands for plutonium-239 and -240 is 1,000 times higher than samples from Chernobyl, Ukraine and Fukushima, Japan,” she added.

South Pacific Island countries and the international community have reason to be concerned. People from the South Pacific region should no longer be the victim of political blocs and military confrontation by individual countries, Hua said.

China was among the first countries to sign the treaty, and strongly supports its goals and objectives.

“China committed to suspending nuclear tests for 25 years, supports the treaty’s to be effective as early as possible and will contribute strength to promote its effectiveness. China will work tirelessly to achieve the goals on the comprehensive prohibition and total destruction of nuclear weapons,” the spokesperson said.

The nuclear submarine project under AUKUS has a huge risk. It violates the spirit of the Non-Proliferation Treaty (NPT). The move may also trigger other countries to make similar moves and damage the international non-proliferation mechanism, exacerbating a regional arms race, Hua said.

The international community should come together against the nuclear submarine project launched by the US, Britain and Australia, and cannot let it be like this, Hua said.