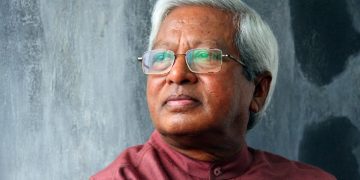 Sir Fazle Hasan Abed, who was among a handful of individual, independent  social activists who played a critical role in pulling Bangladesh out of abject poverty, died in Dhaka on December 20 at the age 83 after 47 years of ceaseless toil.

Writing about Abed, the founder of the world-renowned micro-credit movement, Dr.Muhammad Yunus, said: “It is certainly not an exaggeration to say that there is hardly anyone among the 170 million people of Bangladesh who is not benefited in some way from Abed’s programs or who does not enjoy products and services provided by his organizations. If she is a poor person or a village woman, she has been in contact with Abed’s activities at every step of her life, in education, health, income generation, self-awareness and many more.”

Yunus further said: “Abed changed the concept of the NGO for the whole world. He provided an example of an NGO that does not shy away from national scale responsibility for every single social and economic issue, with a mission of completing the task, and not just creating islands of success. Abed gave the NGO a new identity – one that works nationwide, even globally and multi-dimensionally, without falling victim to its own bureaucracy.”

Founded in 1972, Abed’s NGO, now called Building Resources Across Communities (known as BRAC or Brac) is now the world’s largest multi-national NGO with 200,000 staff serving in eleven countries. He built BRAC brick by brick after quitting his job as an accountant in the UK and selling his flat there for a little over GBP 6000. This was at a time when Bangladesh was in tatters having just emerged from a bloody war of liberation and was being sneered at in the West as an irredeemable “basket case”.

Unlike others in the field of development,  who believed that the only recipe for economic prosperity is large scale national-level development work through heavy foreign aid, Abed took the opposite “bottom-up” approach.

He attended to the needs of the rural poor in the areas of health, education, and other grassroots level problems. In course of time, his successes in these fields created for Bangladesh the manpower needed for increasing GDP. No wonder then that Bangladesh, the “basket case” of the 1970s, is now growing at 7 to 8%, the highest GDP growth rate in South Asia.

Abed’s approach anticipated the theory of  Noble  Laureates Abhijit Banerjee and Esther Duflo that the best way to bring about GDP growth is by implementing programs to strengthen people at the grassroots level.

Abed’s work began upon the realization that one of the basic and critical problems in Bangladesh was high child mortality which was mainly due to diarrhea. When his friend, Dr Lincoln Chen, suggested that he start a project in which volunteers would go door-to-door and show people how the cure,  oral saline, could be easily prepared at home with salt and jaggery, Abed took it up with alacrity.

Writing on this, Golam Mortza, says that initially, BRAC covered 20,000 homes under Sylhet’s Shalla police station. Training was given to volunteers in the villages, but there were social obstacles. To quote Abed: “Our volunteers were teaching only the women. Bur we realized that targeting only women would not work. In order to make oral saline credible, we needed to raise awareness among the men as well. Traditionally, families in our country function on men’s orders.”

“The project was not seeing success because the men were not realizing the benefits of saline. So, we had to make them understand that diarrhea could be cured if saline was given. Women needed to learn the recipe but men needed to have faith in it.”

“ I arranged workshops in villages where the male members of the families would be brought and given lectures for two hours. Such workshops were held at market places too. I observed that everyone was paying attention. They were asking questions and were also satisfied with the answers. Even Imams (Islamic clerics) were involved in the process. We used to speak about the benefits of oral saline in mosques after Jumma prayers. Gradually, villages started trusting oral saline.”

However, it took BRAC ten long years to declare the campaign a success. BRAC took the saline project to a few African countries as well, despite adversities.

Besides the oral saline project, the NGO successfully carried out campaigns on vaccination and TB as well, handling hurdles smartly, Mortaza says.

Mahfuz Anam, editor of The Daily Star, recalls a meeting with Abed in 1992I when he spoke about the critical role played by women in economic development including “managing poverty”.

Abed said: “Most of us manage various levels of wealth, but the poor women in Bangladesh manage poverty, and as such, they are, by experience, far better managers than men. Whatever meager resources they have, and whatever little the men earn, with that the women feed the family, run the household, provide education for the children, healthcare to the extent possible, and inject whatever they can with their own income-generating activities. Our women’s minds are consumed by the singular thought of keeping the family afloat with whatever they have and somehow move forward.”

Anam goes on to say that “Abed’s absorbing description of women’s role –  as managers, planners and navigators of poverty-shackled families’ fortune –  suddenly made clear to him the insight of giving priority to women in development activities.

“Managing poverty makes a woman acutely aware of the bits of resources they have. This awareness makes them far more efficient users of that resource. That is principally why the rate of return of micro-credit is nearly 99 percent (compare that with the NPL of our elite borrowers) as almost all the borrowers are women – each being managers par excellence.”

Anam is impressed by the size of BRAC’ activities. It runs a massive non-formal education program, which at one point, ran 63,000 schools. The non-formal education model that BRAC pioneered is now replicated in several dozen countries across the globe in various forms. Abed also built the BRAC Bank, BRAC Institution of Governance and BRAC University. In partnership with others, Abed built Delta-BRAC Housing and  Guardian Insurance. There are numerous civil society bodies that he helped set by working behind the scenes, such as Campe, and Ain-o-Salish Kendra, etc. He assisted many others in setting up their own organizations.

Anam says that Abed was flawless manager. “ In all the institutions Abed built, he ensured the highest level of management with financial discipline being at its core.  BRAC’s microcredit program, which gave out loans to the tune of US$ 4.2 billion this year alone, functions without any blemish. All global donors like the World Bank, ADB, Soros Foundation, Melinda and Bill Gates Foundation, and many others extend resources to institutions set up by Abed literally without too many questions, simply because they have enormous faith in Abed’s management standards,” Anam observes in his tribute.

Abed had won many international awards including the knighthood.