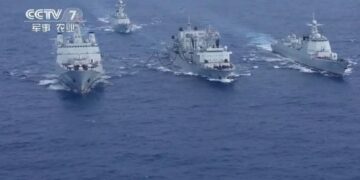 Colombo, July 27: Much to the concern of peace-loving people in the region, there are strong indications of an increase in power rivalry in the Indian Ocean Region (IOR). The rivalry is expected to continue for the foreseeable future as two regional powers have not abated their arms-race.

India issued a tender for the INRs 500 billion (US$ 7 billion) project last Tuesday (July 20). The Indian Defense Ministry issued a Request for Proposal to the defense shipyard at th Mazagaon Docks (MDL) and the private ship-builder Larsen & Toubro, which in turn will tied-up with one of the five shortlisted foreign companies to submit techno-commercial bids for the mega diesel-electric submarine-building programme called `Project-75 India (P-75I)’.

Project ‘75 India’ was initiated way back in November 2007 to get six conventional submarines with better sensors and weapons and an air-independent propulsion system (AIP). The Defense Acquisition Council (DAC) approved the issue of the Request for Proposal for Project P 75 (I) under the Strategic Partnership (SP) Model.

DAC, which is the highest body on acquisition matters, had already shortlisted Mazagaon Docks and private shipbuilder Larsen & Toubro (L&T) for the contract.

Indian military analysts have been of the view that the Indian Navy’s underwater capabilities are insufficient, considering that the country has a large coastline of 7,516 km.

In 2019, the Cabinet Committee on Security approved a program to build six nuclear-powered attack submarines, as an answer to China’s naval might. But experts believe that the project will take at least a decade to complete.

With the rapid growth of the arms race and the pattern of competitive acquisition of naval capability by China and India, the hope of the small littoral nations to keep the Indian Ocean Region as a Zone of Peace becomes an impossible dream. Sri Lanka pioneered the call for an ‘Indian Ocean Peace Zone’ way back in 1972.

Although the super power rivalry between the United States and the Soviet Union ended with collapse of the latter in late 1980s, the regional power rivalry between India and China continues unabated. Given the strategic competition and growing rivalry between China and India, it is inherently in Sri Lanka’s national interest to have a balanced approach while dealing with the two powers.

In line with its neutral foreign policy, Sri Lanka is determined to keep a fine balance in its international affairs. Delivering the keynote address at the 26th International Conference on “The Future of Asia” organized by Japanese media group Nikkei, President Gotabaya Rajapaksa said: “While we are aware of world power rivalries and regional power dynamics, our foreign policy is neutral.” In reply to a question from Nikkei moderator Go Yamada on balancing India and China, President Rajapaksa explained that Sri Lanka has historically maintained relationships spanning centuries with both India and China. “We will work closely with India and all regional partners to ensure that the Indian Ocean remains secure for the benefit of all countries,” he emphasized. “Our cooperation with China is on par with overall economic and commercial trajectories,” he added.

“We consider India our closest neighbor and a longstanding friend and we understand their security concerns and sensitivities. We will never allow anyone to use Sri Lanka to jeopardize India’s security,” the President said.

“China has been a key investment partner to Sri Lanka. As a developing country, Sri Lanka wishes to obtain the support of all partner nations to fast-track our development aspirations and improve the livelihoods of our people. My Government is keen to further strengthen our relationships with Asian nations and countries farther away,” President Rajapaksa said.

Arms buildups and arms races play a prominent role in international relations. American defense analyst Charles Glaser of the University of Chicago says, building up arms is one of a state’s three basic options to achieve its international goals. The other two are gaining allies and cooperating with its adversary to reduce threats.

In broad terms, choosing between more competitive and more cooperative combinations of these options is among the most basic decisions a state must make, and it is often the most important.

Sri Lanka is an island strategically located at the center of the Indian Ocean connecting  the east and the west since ancient times. Sri Lanka has no desire to get caught in a power game between the two regional powers for supremacy or to choose between the two.

Today, Sri Lanka has outstanding port infrastructure that can facilitate transshipment and provide world-class services even for the largest container ships. It can contribute greatly towards maintaining maritime security in this region, helping protect vital sea lines of communication on behalf of all nations.

“We are determined to safeguard our national interests based on friendly, cooperative interactions with all our partners on equal terms. We follow a neutral foreign policy. We aim to harness the advantages of our strategic location to develop our economy and uplift the wellbeing of our people in a sustainable and equitable way. We seek to significantly strengthen our bilateral relationships with all countries, and in particular with our partner countries in the Asian region in terms of trade and investment,” President Rajapaksa said at the Future of Asia Conference.