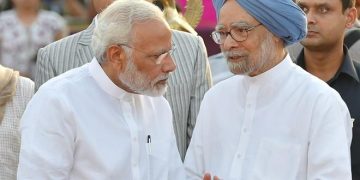 New Delhi, June 22 (Scroll.in)/newsin.asia): Former Indian Prime Minister Manmohan Singh said on Monday that Prime Minister Narendra Modi’s comments on the border incidents in Friday’s all-party meeting, were misleading and inappropriate and that he must “always be mindful of the implications of his words”.

A controversy erupted after the prime minister said that no outsider was inside Indian territory in Ladakh nor had any border post of the Indian Army been captured by outside forces during the clashes with Chinese troops. However, a clarification issued by Modi’s office claimed that attempts were being made to give a “mischievous interpretation” to his remarks and said his comments referred to the situation at the Line of Actual Control after Indian soldiers had foiled China’s intrusion.

“At this moment, we stand at historic cross-roads,” Singh said in a statement. “Our government’s decisions and actions will have serious bearings on how the future generations perceive us. Those who lead us bear the weight of a solemn duty. And in our democracy that responsibility rests with the office of the prime minister. The prime minister must always be mindful of the implications of his words and declarations on our nation’s security as also strategic and territorial interests.”

In his first response to last week’s clashes, the senior Congress leader urged the government not to be cowed down by threats and intimidation in dealing with China or compromise with India’s territorial integrity. “The prime minister cannot allow them [China] to use his words as a vindication of their position and must ensure that all organs of the government work together to tackle this crisis and prevent it from escalating further,” he added.