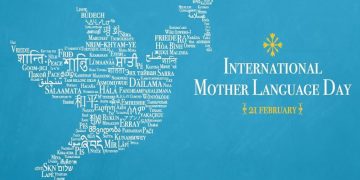 Many years ago, working in the Kolkata station of All India Radio, it was an interesting to find a special place being given to a tribal language called Santali. News and other programs were broadcast in this little known language. Programmes in Santali continue to this day and are popular along with broadcasts in Bengali, Hindi, Sanskrit, English and Urdu.

The promotion of Santali and other languages by AIR was an important contribution to encouraging communication in the Mother Language. It is due to encouragement of this sort that the Santali language had developed its own script – Ol Chiki – in 1925. The man who did this was Pandit Raghunath Murmu. Till the 19 th.  century, Santali was an oral language handed down from generation to generation without a written word.

The Ol Chiki script  is unlike most Indic scripts, which are derived from Brahmi. Ol Chiki is not an abugida, with vowels given equal representation with consonants.

Communication is indeed an important tool and the use of the Mother Language for communication adds a significant degree of familiarity and understanding.

Nobel laureate Rabindranath Tagore envisioned and advocated a system of education that is intrinsically and closely associated with nature which includes the Mother-tongue as the medium of instruction. Gurudev Tagore believed that language is the true vehicle of expression.

February 21 is celebrated as International Mother Language Day and the basic purpose of this celebration is to give recognition to an estimated 7,000 languages spoken in the world. The day commemorates students who laid down their lives for their language – Bangla – in clashes with the Pakistani police in 1952 in Dhaka which is now the capital of Bangladesh, a Bangla-majority country which came into being after separation from Pakistan in 1971.

Recognising this significant sacrifice and contribution of the Bengali students, February 21 was designated in 1990 as International Mother Language Day (IMLD) by the General Conference of UNESCO to promote linguistic and cultural diversity and multilingualism across the globe.

And education as a basic right can be implemented only if it is imparted through the mother language. According to UNESCO, languages help strengthen co-operation and contribute to giving quality education to all; building inclusive knowledge societies; and preserving cultural heritages.

The benefits of science and technology for sustainable development can also be propagated better through the Mother Language.

Languages need an effort to preserve them as language substitution is also going on in the globalized world. Languages are among the most precious inheritance, but at the same time they are also the most fragile.

The contribution of the Bengali language also known as Bangla, is indeed great for creating a place for the Mother Language in the world.

It is interesting to note the association and various reflections of the Bengali language across South Asia. Bengali, also known by its autonym Bangla, belongs to the Indo-Aryan language group spoken in the Indian sub-continent.

Prakrit or Middle Indo-Aryan is the predecessor of the Bengali language that evolved from Sanskrit or Old Indo-Aryan. Today Bangla is the official language of Bangladesh and is also widely spoken across a vast geographical area- including the Indian states of West Bengal and Tripura and in Barak Valley of Assam (in India) and several other states.

It is interesting to note the association and close proximity of Bangla with several other languages of the world. Close to Hindi, it is recognised as the second most widely spoken of the 22 scheduled languages of India.

Ancient Indian texts, including the Aiteraya, Aranyaka and the Bhagavat Purana had mentioned the Bangla language as the “language of birds and aboriginals”.

Tracing the emergence of the Bangla language, one could go as far back in history as 1000–1200 AD. It evolved  from Sanskrit and Magadhi Prakrit. The local Apabhraṃśa of the eastern subcontinent, Purbi Apabhraṃśa or Abahatta (“Meaningless Sounds”) finally developed into various regional dialects, Bengali, Assamese, Bihari, and Odiya

Though many critics feel that points of divergence emerged at a much earlier period, Bangla a was never static. Various dialects developed and several authors wrote in multiple dialects.

Proto-Bengali was the language of the Pala Empire and the Sena dynasty. Further changes occurred in later years as Bangla was patronised by the rulers of Medieval Bengal and duly used in royal courts.

Languages are not only repositories of identities, they are also reflections of the myriad processes of acculturation and assimilation. The history of communities is preserved through languages and they help carry important cultural messages to new generations.

Languages are the most powerful instruments of preserving and developing a peoples’ tangible and intangible heritage. All moves to promote the dissemination of mother tongues as well as a common language of communication or a lingua franca, serves not only to encourage linguistic diversity and multilingual education but the development of a fuller awareness of linguistic and cultural traditions throughout the world.

Languages’ growth and co-existence inspire solidarity based on understanding, tolerance and dialogue.

A better understanding of the methods of communication through languages helps to fathom similarities as well as differences between various cultures of the world.