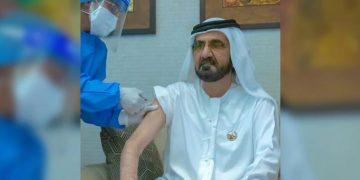 by Editor
in Around The World, Coronavirus, Health, Instagram
Reading Time: 2min read
1 0 Sheikh Mohammed shared a picture on Twitter of him getting vaccinated by a medical staffer. (Photo: Twitter)

Dubai, November 3 – Sheikh Mohammed bin Rashid, Vice President and Ruler of Dubai, has received the Covid-19 vaccine, according to a post on his Twitter account on Tuesday.

He thanked all those working to develop a vaccine for the coronavirus.

“While receiving the Covid-19 vaccine today. We wish everyone safety and great health, and we are proud of our teams who have worked relentlessly to make the vaccine available in the UAE,” he said.

“The future will always be better in the UAE.”

The Prime Minister was the latest senior figure in the UAE to take China’s Sinopharm vaccine.

The country hosted a Phase-3 trial that involved 31,000 volunteers in the Emirates, Bahrain and Jordan.

The jab has since been administered to frontline medical workers, senior officials and some members of the Cabinet, after it received approval from the UAE Government for limited use in September.

Sheikh Rashid said he looked forward to “victory over the virus”.

In other developments on Tuesday, Bahrain granted emergency approval for the use of a Sinopharm vaccine on frontline workers, state news agency BNA said.

In mid-October, China National Biotec Group, part of Sinopharm, which has two vaccines in development, said about 480,000 people had taken the jab to date. A further 93,000-plus had applied to be inoculated.

The results of the Phase-3 trial have not been independently reviewed in a published article yet, but a study in Lancet Infectious Diseases last month showed strong results from Phase 1 and 2, including in people older than 60.

Sinopharm’s Phase-1 and 2 trials were carried out in China between 29 April and 30 July and involved more than 600 healthy volunteers aged 18 to 80.

In those two phases, the Lancet article said, the vaccine triggered antibodies that block the virus from infecting cells in all volunteers within 42 days.

Those aged 60 and over were slower to respond and produced fewer antibodies.

Younger participants detected antibodies within 28 days and the vaccine was tolerated well at all doses, according to the study.