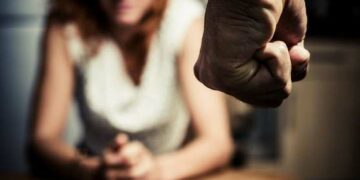 Colombo, June 15 (Daily Mirror): Lockdown-triggered domestic violence appears to be no less Global than the COVID-19 pandemic itself. Reports from across the globe suggest that domestic violence has surged since the first half of 2020, when the pandemic appeared.

According to the UN, one in three women worldwide have experienced physical or sexual violence mostly by an intimate partner. Before the pandemic, in the previous year, 243 million women and girls, aged 15-49, had experienced sexual and/or physical violence by an intimate partner. Since the outbreak of COVID-19, reports from front line workers showed that all types of violence against women and girls, particularly domestic violence, had intensified.

“This is the Shadow Pandemic growing amidst the COVID-19 crisis and we need a global collective effort to stop it,” the UN has said.

UN reports that the Middle East has the second highest prevalence of violence against women (37%) among all countries. Here there has been a reported increase of 50-60% of cases, as per survivors’ calls for help to women’s organizations.

COVID-19 isolation, restricted movement, and stay-at-home measures to contain the spread of the infection, have reduced the chances of women and their children escaping from violence. As family members spend more time in close contact and household stress intensifies substantially due to reduced or lost income, frustration mounts leading to irrational violence against the weaker family members such as women and children.

A survey in Sri Lanka titled COVID19 Impact on Key Populations PLHIV and SR Organizations covered by Inter Press Service (IPS) showed that 76.8% of the respondents experienced verbal abuse; 7.8% encountered physical abuse, and 5.6% sexual violence. The main perpetrators were neighbors at 49% followed by parents at 25%, intimate partners at 24%  and the police at 10%.

The survey had further found that out of 248 respondents, 174 expressed hopelessness, 159 said they were stressed, 95 suffered from anxiety and 34 experienced depression

Niluka Perera, a consultant from CARE Consortium, attributed the escalation of violence to the COVID-19 the lockdown.

The Epidemiology Unit of the Lankan Ministry of Health reports that “Stay-at-home” orders increases the frequency of demands for sex from a partner, but condoms and contraception may be less accessible which leads to an increased risk of unprotected or unwanted sex.

Furthermore, phones or internet access may be limited or monitored by the perpetrators of intimate partner violence. New York Times has dubbed this phenomenon ‘Intimate Terrorism’.

The Hindustan Times reported in March 2021 that in India, the number of complaints of violence against women received by the National Commission for Women (NCW) rose sharply from 19,730 in 2019 to 23,722 in 2020, the first year of a nation-wide lockdown.

A year after the lockdown in 2021, the NCW continues to receive over 2,000 complaints every month of crimes against women, with nearly one-fourth related to domestic violence.

Soon after an all-India lockdown was imposed on March 25, 2020 , the NCW reported a surge of complaints related to domestic violence, so much so that it started a dedicated WhatsApp number for reporting of just domestic violence complaints.

In Pakistan, women working in the informal sector are most impacted by domestic violence during the pandemic. A Deutsche Welle story said in July 2020, that lockdowns confined people to small home (DW) where distancing from abusive relatives was not possible. Officials said that there had been a 25% increase in domestic violence incidents across Punjab province, with authorities registering 3,217 cases between March and May 2020.

“There is a hierarchy of violence in frustrated families. The in-laws and husband are violent with the wife, who takes out her anger on children,” remarked Ruhi Ghani, a psychologist. Zahra Vayani, a lawyer, said that the number of children being sexually abused had considerably increased during the COVID-19 crisis.

“I have received reports about children as young as four being raped during the lockdown,” she said. Children working as domestic workers have been facing increased abuse since the start of the pandemic.

A recent survey by Manusher Jonno Foundation (MJF), at least 4,249 women and 456 children were subjected to domestic violence in 27 out of 64 districts of Bangladesh in April 2020, with 1,672 women and 424 children facing violence for the first time in their lives. Despite the closure of educational institutions and the absence of public gatherings during the Corona period, 626 children were raped while child marriages increased by some 60% during January to December 2020, MJF said in a press conference in January 2021.

The advanced countries of Europe are not exempt from the scourge of domestic violence. In Spain, the emergency number for domestic violence received 18% more calls in the first two weeks of lockdown than in the same period a month earlier. The French police reported a nationwide spike of about 30% in domestic violence.

The perpetrator of the violence takes advantage of the situation in which the victim is trapped, cannot run away or help cannot arrive because of the lockdown. Police are busy enforcing the lockdown and do not respond to cries for help to stop a domestic quarrel.

In addition to physical violence, which is not present in every abusive relationship, the common tools of abuse constant surveillance; strict, detailed rules for behavior; and restrictions on access to such basic necessities as food, clothing and sanitary facilities.

Lockdowns have also shattered support networks, including the extended family, friends and the police. In Italy the government said local authorities could requisition hotel rooms to serve as makeshift shelters where victims could quarantine safely. France followed suit.

The number of domestic violence incidents in the US increased by 8.1% after lockdown orders, according to analysis released by the National Commission on COVID-19 and Criminal Justice (NCCCJ) on February 24, said Global Citizen said in a report in March 2021

“Our analysis confirms the initial fears we had at the outset of the pandemic,” Alex Piquero, chair of the University of Miami department of sociology and lead author of the analysis, told CNN.

As in the rest of the world, domestic violence in the US often goes underreported due to shame and fear and is not always taken seriously by law enforcement. Lockdowns have also trapped more survivors with their abusers and made it more difficult to report incidents or have others intervene.

“In my mind, I think that 8% is a floor and not a ceiling,” Piquero said. “I think the problem is actually worse than we actually know right now.”

Unhealthy coping strategies, including the increased use of alcohol and other substances, are also thought to have raised the risk of abuse,” the NCCCJ said.

“The pandemic has thrown many of the most vulnerable people in our society into especially challenging circumstances, so these findings should not surprise us,” added Thomas Abt, Director of the NCCCJ.