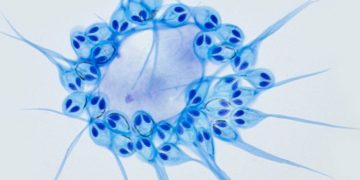 by Editor
in Around The World, Science, World
Reading Time: 3 mins read
4 0 Feb 28 (Science Alert) – Some truths about the Universe and our experience in it seem immutable. The sky is up. Gravity sucks. Nothing can travel faster than light. Multicellular life needs oxygen to live. Except we might need to rethink that last one.

Scientists have just discovered that a jellyfish-like parasite doesn’t have a mitochondrial genome – the first multicellular organism known to have this absence. That means it doesn’t breathe; in fact, it lives its life completely free of oxygen dependency.

This discovery isn’t just changing our understanding of how life can work here on Earth – it could also have implications for the search for extraterrestrial life.

Life started to develop the ability to metabolise oxygen – that is, respirate – sometime over 1.45 billion years ago. A larger archaeon engulfed a smaller bacterium, and somehow the bacterium’s new home was beneficial to both parties, and the two stayed together.

That symbiotic relationship resulted in the two organisms evolving together, and eventually, those bacteria ensconced within became organelles called mitochondria. Every cell in your body except red blood cells has large numbers of mitochondria, and these are essential for the respiration process.

They break down oxygen to produce a molecule called adenosine triphosphate, which multicellular organisms use to power cellular processes.

We know there are adaptations that allow some organisms to thrive in low-oxygen, or hypoxic, conditions. Some single-celled organisms have evolved mitochondria-related organelles for anaerobic metabolism; but the possibility of exclusively anaerobic multicellular organisms has been the subject of some scientific debate.

That is, until a team of researchers led by Dayana Yahalomi of Tel Aviv University in Israel decided to take another look at a common salmon parasite called Henneguya salminicola.

It’s a cnidarian, belonging to the same phylum as corals, jellyfish, and anemones. Although the cysts it creates in the fish’s flesh are unsightly, the parasites are not harmful, and will live with the salmon for its entire life cycle.

Tucked away inside its host, the tiny cnidarian can survive quite hypoxic conditions. But exactly how it does so is difficult to know without looking at the creature’s DNA – so that’s what the researchers did.

They used deep sequencing and fluorescence microscopy to conduct a close study of H. salminicola, and found that it has lost its mitochondrial genome. In addition, it’s also lost the capacity for aerobic respiration, and almost all of the nuclear genes involved in transcribing and replicating mitochondria.

Like the single-celled organisms, it had evolved mitochondria-related organelles, but these are unusual too – they have folds in the inner membrane not usually seen.

The same sequencing and microscopic methods in a closely related cnidarian fish parasite, Myxobolus squamalis, was used as a control, and clearly showed a mitochondrial genome.

These results show that here, at last, is a multicellular organism that doesn’t need oxygen to survive.

Exactly how it survives is still something of a mystery. It could be leeching adenosine triphosphate from its host, but that’s yet to be determined.

But the loss is pretty consistent with an overall trend in these creatures – one of genetic simplification. Over many, many years, they have basically devolved from a free-living jellyfish ancestor into the much more simple parasite we see today.

They’ve lost most of the original jellyfish genome, but retaining – oddly – a complex structure resembling jellyfish stinging cells. They don’t use these to sting, but to cling to their hosts: an evolutionary adaptation from the free-living jellyfish’s needs to the parasite’s. You can see them in the image above – they’re the things that look like eyes.

The discovery could help fisheries adapt their strategies for dealing with the parasite; although it’s harmless to humans, no one wants to buy salmon riddled with tiny weird jellyfish.

But it’s also a heck of a discovery for helping us to understand how life works.

“Our discovery confirms that adaptation to an anaerobic environment is not unique to single-celled eukaryotes, but has also evolved in a multicellular, parasitic animal,” the researchers wrote in their paper.

“Hence, H. salminicola provides an opportunity for understanding the evolutionary transition from an aerobic to an exclusive anaerobic metabolism.”