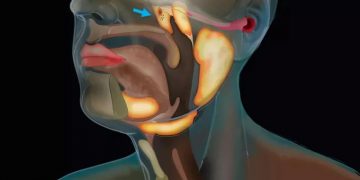 The "accidental" discovery was made when researchers at the Netherlands Cancer Institute were using a combination of CT scans and positron emission tomography (PET) scans called PSMA PET-CT to study prostate cancer. The study, published in the journal Radiotherapy and Oncology, confirmed the presence of the glands after examining at least 100 patients. (Photo: The Netherlands Cancer Institute)

October 22 ( India Today) – Scientists in the Netherlands have discovered a new organ, a set of salivary glands set deep in the upper part of the throat, Livescience reported. The “accidental” discovery was made when researchers at the Netherlands Cancer Institute were using a combination of CT scans and positron emission tomography (PET) scans called PSMA PET-CT to study prostate cancer.

The study, published in the journal Radiotherapy and Oncology, confirmed the presence of the glands after examining at least 100 patients.

Study co-author and Netherlands Cancer Institute radiation oncologist Wouter Vogel said that the discovery may be important for cancer treatment.

Until now, this nasopharynx region – behind the nose – was not thought to host anything but microscopic, diffuse, salivary glands, but, the newly discovered set are about 1.5 inches (3.9 centimetres) in length on average.

Because of their location over a piece of cartilage called the torus tubarius, the discoverers of these new glands have dubbed them the tubarial salivary glands. The glands probably lubricate and moisten the upper throat behind the nose and mouth, Livescience reported the researchers in the journal Radiotherapy and Oncology as saying.

According to Wouter Vogel, Until now, there were three known large salivary glands in humans — one under the tongue, one under the jaw and one at the back of the jaw, behind the cheek. “Beyond those, perhaps a thousand microscopic salivary glands are scattered throughout the mucosal tissue of the throat and mouth,” Wouter Vogel said in a statement.

“So, imagine our surprise when we found these,” Vogel said.

To confirm the discovery, Vogel and his colleagues imaged 100 patients (99 of them men due to the focus on prostate cancer) and found that all of them had the newly discovered glands. They also dissected that nasopharynx region from two cadavers from a human body donation program and found that the newfound region consisted of mucosal gland tissue and ducts draining into the nasopharynx.

Vogel said that the discovery could be important for cancer treatment as doctors using radiation on the head and neck to treat cancer try to avoid irradiating the salivary glands because damage to these glands can impact the quality of life.

“Patients may have trouble eating, swallowing or speaking, which can be a real burden,” he said.

“Our next step is to find out how we can best spare these new glands and in which patients. If we can do this, patients may experience less side effects, which will benefit their overall quality of life after treatment,” Vogel said.