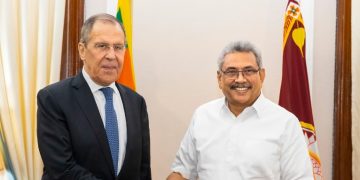 “In the past three decades, we have fought against ruthless terrorism in or respective countries. We face numerous challenges in multilateral fora where we continue to support each other. I take this opportunity to extend Sri Lanka’s deep appreciation to the government of the Russian Federation for its unequivocal support for Sri Lanka’s sovereignty and territorial integrity. Therefore, a strong sense of understanding , solidarity and mutual respect underpin the Sri Lanka-Russia bilateral engagement,” Gunawardena said.

The two countries pledged to cooperate in economic development. The agreed areas of cooperation are: agriculture and the food economy, fisheries, water management, education, including technical and  vocational education, trade and investment, tourism, security and  defense, including counter terrorism, science and technology, renewable energy and oil exploration.

Previously, when Russia was part of the USSR, the latter had helped Sri Lanka in the field of housing, irrigation and steel and tyre manufacturing. Since 1840, Russian political movements and literature had greatly shaped the political thinking and literature of Sri Lankans, Gunawardena recalled.

At his meeting with President Gotabaya Rajapaksa, Foreign Minister Lavrov said that over five thousand Sri Lankans have graduated from Russian universities. Presently, there are around 800 students studying in Russia. The scholarship scheme for military cadets which was organized when President Gotabaya was Sri Lanka’s Defense Secretary is still an ongoing program which has increased its intake to 70 students.

President Gotabaya spoke of the possibility of new flights to Russia in the near future.

He pointed out that Foreign Minister Sergey Lavorv had begun his diplomatic career in Sri Lanka in 1972 and had learnt Sinhala during his stay here.