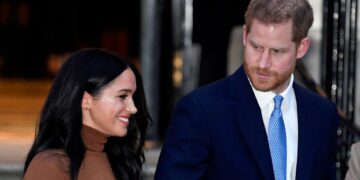 by Editor
in Around The World, United Kingdom, World
Reading Time: 2 mins read
22 1 Sept 6 (SkyNews) – Prince Harry and Meghan Markle have made a “breathtaking” request to meet with the Queen in the hope to plan a Windsor Castle christening for their daughter, Lilibet.

The Duke and Duchess of Sussex’s hope to introduce their daughter to Queen Elizabeth has left senior senior staff “stunned by the request for a meeting”.

“Harry and Meghan have made this offer but a lot of people are shocked by the sheer nerve of it,” a source told The Sun.

“They may genuinely want to see the Queen but it’s breathtaking given what they’ve put her through this year.”

Meghan gave birth to the couple’s second child in June, a daughter named Lilibet Diana Mountbatten-Windsor in honour of both the Queen and Princess Diana.

Prince Harry has jetted to the UK twice since he moved to the US: the first time for his grandfather’s funeral, the second time for the unveiling of his mother’s statue.

The controversial royal couple have made a series of bombshell claims about the Monarchy in the last year.

The couple claimed a certain member of the Royal Family had “concerns” about how dark their baby Archie’s skin colour would be before he was born during the Oprah Winfrey interview.

Meghan also spoke openly about her struggles adjusting to the Royal Family, and being refused help after having suicidal thoughts.