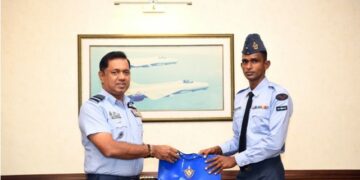 He embarked on a challenging endeavor of swimming across the Palk Strait from Talaimannar to Dhanishkodi and back on Saturday.

He returned to the Island this morning completing the challenge in record 28 hrs & 19 min 43 seconds.

Roshan Abeysundar is 32 years old and a product of Mathara Central College. An enlisted airman of Sri Lanka Air Force since 2008, he has successfully participated in various Adventure Sea- Swimming expeditions in Sri Lanka. With great determination he successfully completed Sri Lankan National Swimming record of 49km in 23hrs on 26 Mar 21.

Though 14 swimmers have crossed the Palk Strait to date, the unique feat of swimming back had been undertaken by only one Sri Lankan before. Kumar Anandan did it in 1971, taking 51 hrs to complete the event.

The Indian High Commission said in a release on Saturday that it is happy to provide necessary arrangements on the Indian side, and extends its best wishes to the ace swimmer for success in his forthcoming endeavor.

Demonstrating the close ties between the two countries, the event was flagged off in the presence of Mrs Archana Ramesh, Consul from Consulate General of India, Jaffna and Air Cmde S.N. Fernandopulle, Director Sports from Sri Lanka Air Force.

Through this expedition, Abeysundara has spread awareness about the Fit Sri Lanka Movement.

Vivekanandan Selva Kumar Anandan was a Guinness World Records holder. His many records include swimming the Palk Strait, from Sri Lanka to India and back, in 51 hours in 1971. Once he met with a serious motor vehicle accident and was hospitalized for six months.

While attempting to swim the English Channel on August 6, 1984 he collapsed and died due to heavy currents. He was 36.

Kumar Anandan held a number of individual Guinness Records at one point, which included Non-Stop Water treading (80 hours at Chennai), Standing on one leg for 33 hours, Non-Stop dancing, Ball punching for 136 hours, etc.

Hypothermia and exhaustion were the cause of death in the English Channel. At the subsequent inquest, Coroner Richard Stuart recommended that anyone making an attempt to swim the Channel should produce a fitness certificate. Since then all swimmers have been told they must produce a medical certificate.

Before the swim Anandan had said “The cold sea is my biggest worry. I have not had the time to acclimatize to it. The sea back home is very warm and comfortable”. He got into trouble several miles off Dover in rough seas. He was pulled out and given mouth-to-mouth resuscitation, transferred to another boat and then to an RAF helicopter, which carried him to Canterbury Hospital where he was pronounced dead.

He was a Tamil from Valvettithurai, Jaffna District, Sri Lanka. He had a distinguished educational career; he was a graduate of University of London and also obtained a Bachelor of Law degree in Sri Lanka (then Ceylon) and was an Attorney at Law by profession.