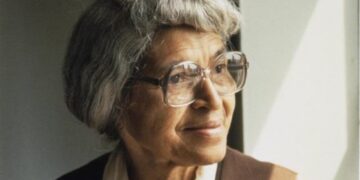 Rosa McCauley Parks was an African American civil rights leader, most well-known for sparking the Montgomery Bus Boycott and for being an active member in the American Civil Rights Movement of the 1950’s and 1960’s.

A member of the National Association for the Advancement of Coloured People (NAACP) she devoted her life to seeking justice for African American people, heavily oppressed under segregation laws of the time.  On the 1st of December 1955, whilst living in Montgomery, Alabama, Rosa Parks refused to give up her bus seat to a White man while travelling home from work. Her actions led to the Montgomery Bus Boycott, which eventually led to the de-legislation of segregated buses and introduced integrated buses.

The Montgomery Bus Boycott paved the way for further activism and reversal of racially discriminatory laws and eventually, the Civil Rights Act of 1964.

Rosa Louise McCauley was born on the 4th of February 1913 to a middle class African American family in Tuskegee, Alabama.  Her parents separated when she was 3, and she, her brother and grandparents, moved just outside Montgomery, Alabama and resided in a farm. She displayed a talent for tailoring and quilting. She attended rural schools in the area and went to the Industrial School for Girls in Montgomery. This was then followed by a segregated, heavily underfunded high school that was completely underequipped. The pupils of the school found themselves to be constantly harassed and bullied by White students from nearby schools.

At 16, a member of her family fell badly ill, and Rosa had to drop out of high school and find employment as a domestic cleaner. At 19, she married Raymond Parks, a barber who encouraged Rosa to go back to high school and get her diploma. Rosa Parks later graduated and joined the 2.5% of all African-American women in the 1930’s who had graduated from high school and then joined a clothing company as a seamstress.

In 1942, she joined the Montgomery office of the NAACP and began working as the personal secretary of Edgar Nixon. Nixon was an activist who inspired Parks to get directly involved in activism as well. She established The Committee for Equal Justice, a team which sought justice and collected evidence against 7 men who gang-raped Recy Taylor, an African American woman as she went home from church in 1944. However, even with the signed confessions of all 7 rapists, no one was indicted. She also participated in the defense of Emmet Till, a 14-year-old boy lynched for flirting with a White woman in August 1955. Parks also worked hard to exonerate African American men falsely accused of rape.

She was reported to be a hard worker and devoted to her job at the NAACP, even though it was low-paying and part-time.

On the 1st of December 1955, Rosa Parks boarded a bus from her workplace at a clothing factory. She took her seat on the first row of the “colored” section of the bus in which she sat with three other African Americans in the same row. The bus was full and when a White man entered the bus, driver James H. Blake ordered all the occupants on Parks’ row to move back, so that the White man may occupy the seats. Everyone on the row obeyed, except for Parks’ who simply moved from her aisle seat to a window seat. When ordered again to move by Blake, Parks simply refused to give up her seat, which stated she had an equal right to occupy. Blake decided to call the police who soon arrived and arrested her for breaking Chapter 6, Section 11 of the Montgomery City Code. She was fined $10, which she decided not to pay. This resulted in a court date being set on the 5th of December, 4 days later.

Parks used her phone call to call her husband, who along with Edgar Nixon bailed her out of police custody. They began discussing plans to engage a full protest of the city’s demeaning and oppressive segregation bus laws on the same day of Parks’ trial.

The NAACP office of Montgomery immediately organized a meeting of its members to discuss a potential boycott of the city’s buses. They chose a boycott as their method of activism, as 75% of bus users at the time were African Americans. If the entire African American population refrained from the usage of buses, it would cause economic harm for the bus companies and force a change in legislation. It was also a non-violent method of acquiring rights and had the potential to be very effective.

By the 2nd of December, 30,000 flyers were mimeographed and distributed to black homes informing these households of the impending protests with a call to refrain from using buses. The turnout was quite impressive, as almost all of the Black population of Montgomery agreed to participate in the boycott. Black taxicab drivers even agreed to accept a discounted fare for black customers. On the 5th, of December 1955 the boycotts began, as almost 40,000 black bus users participated.

Later that day, Edgar Nixon formed the Montgomery Improvement Association (MIA) to organize protests against Parks’ trial. 26-year-old Reverend Dr. Martin Luther King Jr, a newcomer to Montgomery, was appointed the leader of the MIA. People would walk to school and work or organize carpools with friends and families. Cab drivers also played a large part in the people’s commute to work and back. Bus drivers would offer free rides to African Americans, in a bid to win back their loyalty, but these offers were mostly refused. Until there were integrated buses on the roads of Montgomery, the boycotters would not stop. These people, ordinary citizens, played a part in fighting for their rights. They were willing to sacrifice their physical comfort for a greater cause.

Amidst the peaceful protests on the District Court, Parks and Luther King Jr were arrested by police but released soon. The prospect of police intervention bolstered the initiative of the activists even further. For 13 months, the Montgomery Bus Boycotts continued.

After an appeal to the District Court in June 1956, and later to the Supreme Court, the first integrated buses graced the streets of Montgomery on the 21st of December, carrying boycotters and court officials. Soon after, other states began implementing integrated buses.

Life was not so rosy for Parks following her arrest in 1955. She was fired from her job a few months later. Due to the high publicity elicited from the boycott, she also received multiple death threats. She worked under Martin Luther King Jr for the duration of the boycott and later moved to Detroit, Michigan, in search of better opportunities. There she continued to work in Civil Rights, playing an active part in the legislation of the Civil Rights Act of 1964. She also was heavily involved in other projects advocating worker’s rights and youth protection.

By the 80’s Parks faced deaths in her family and financial struggle and was almost evicted from her home if the local council hadn’t banded together and collected funds to keep Parks from eviction and poverty.

In 1987, she and her husband started the Rosa and Raymond Parks Institute for Self-Development, an organization for educating and informing young people of the Civil Rights Movements, by offering classes and tours of significant places.

Parks would later receive the Presidential Medal of Freedom in 1996 from President Bill Clinton, the Martin Luther King Jr Award in 1980 and the Spingarn award, the highest honor bestowed upon a member of the NAACP in 1980.

Rosa Parks was an incredibly influential and a pivotal cog in the gears of social change and activism of the 1950’s and 1960’s. She was not the quiet, meek old woman who was too tired to change her seat. Rosa Parks was a tenacious, determined woman who fought hard for her fundamental rights and protected the rights of others.

Sometime after the boycott she said: “People always say that I didn’t give up my seat because I was tired, but that isn’t true. I was not tired physically, or no more tired than I usually was at the end of a working day. I was not old, although some people had an image of me as being old then. I was forty-two. I was tired of giving in”.

Parks was an advocate of non-violent protest to systemic issues, something she practiced throughout her endeavors in life. For her, it was important that the end goal was attained without any bloodshed or force, as the goal was harmony and equality which violence certainly did not promote.

Rosa Parks died on the 24 October 2005 at the age of 92; her body was flown back to Montgomery and was carried in a horse drawn carriage, and then transported to the US Capitol Hill rotunda, becoming the first civilian to have been given the honor. She was buried in Detroit, Michigan.

Rosa Parks should not just be remembered as the woman who refused to obey a bus driver, but as someone who refused to be oppressed and marginalized on account of institutionalized and systemic racism, and who changed the course of the Civil Rights Movement.