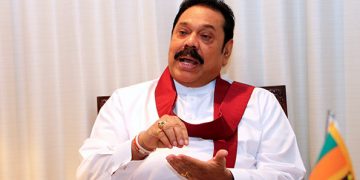 Colombo, March 10: The roots of the anti-Muslim flare up in the central Sri Lankan district of Kandy, lie in decades-long communal politics in Sri Lanka from the national to the local level, says P.K.Balachandran in an article in The Citizen.

Worried about this, former President and leader of the opposition Sri Lanka Podujana Peramuna (SLPP), Mahinda Rajapaksa has called for the strengthening of multi-ethnic and multi-religious national parties to neutralize ethnic and religious parties which have proliferated across the island spreading the contagion of communalism..

In a statement issued on Wednesday on the anti-Muslim riots in the Central Sri Lankan district of Kandy for the past few days, Rajapaksa said that communalism spurred by ethno-centric and religious parties has spread in the country posing a serious threat to its unity and even its territorial integrity.

Drawing a distinction between what is happening now and the situation prevailing in the early years of independence Rajapaksa said that in the first few years after independence, Sinhalese, Tamil and Muslim leaders ruled this country together as partners.

“G.G. Ponnabalam, the then top Tamil leader, had a warm and cordial relationship with the Senanayakes (the first and second Prime Ministers),” Rajapaksa recalled.

“That era ended in the mid-1950s as communalism and separatism came into Northern Tamil politics,” he said.

“But still, in the past, the two main national political parties had Muslim leaders like A.C.S. Hameed, M.H. Mohamed, Badiudin Mohamed and Alavi Moulana who were elected to Parliament not only by Muslims but also by Sinhalese voters.”

“During those decades, tensions between the Sinhalese and the Muslims were virtually non-existent,” Rajapaksa said.

But since the late 1980s a section of the Muslim population has gravitated towards communal political parties, he said and added that this has made it easy for “conspiratorial forces both local and foreign” to inflame tensions between the Sinhalese and the Muslims by using agents provocateurs, he asserted.

“The tension that we see now between the Sinhalese and the Muslims is a fairly recent phenomenon. Everyone will remember that such tensions did not exist until about 2012. What was started by conspirators who are now in the present government, for the purpose of dislodging my government, now appears to have taken on a life of its own and mistrust between the communities is growing by the day,” he charged.

Rajapaksa said that settlement patterns in Sri Lanka necessitate tolerance and coexistence and not conflict.

But communal and ethnic parties are making coexistence difficult by resorting to communal mobilization for partisan ends.

“Even though there are large numbers of Tamils in the North and East, the majority of the Tamil population permanently resides outside the north and east, among the majority Sinhalese. Similarly though there is a significant concentration of Muslims in the east, the vast majority of the Muslims permanently live outside the east, among Sinhalese and Tamils.”

“What we are now experiencing is the mismatch between this demographic reality and communalist politics. The very logic of communal politics requires the portrayal of other ethnic and religious groups as enemies or rivals.”

“Today, the situation is such that a dispute or clash between individuals belonging to different religions or ethnicities, automatically leads to a communal riot that spreads throughout the area,” he pointed out.

Rajapaksa said that this is not a situation that can be allowed to continue.

“There is a need to create in this country a nationalistic alliance comprising Sinhala, Tamil and Muslim leaders resembling the first post-independence government,” he said.

“This is not going to be an easy task given the poisonous contagion of communalism that has spread in this country over the past several decades.”

“However on the basis of the recently concluded local government elections, I have reason to be cautiously optimistic that a window of opportunity exists to be able to turn back the tide of communalism.”

“I intend initiating a dialogue in this regard with national minded Sinhala, Tamil and Muslim individuals and organizations in due course,” Rajapaksa said.

Historically there was no communalism of the virulent kind known in India. It was the most accommodative and tolerant of societies in South Asia till independence was granted by the British in 1948.

Communalism was introduced in 1956 by former Prime Minister SWRD Bandaranaike, who brought in legislation to make Sinhala the sole official language of Sri Lanka when around 20 to 25 % of the population had Tamil as their mother tongue.

By then Bandaranaike had mobilized the Buddhist clergy to take his party to the Sinhalese masses. In the process, he introduced religious communalism which in later years became a powerful force every aspiring leader had to use to come to, and remain in, power.

A religious element was introduced following the establishment of Buddhist and Christian schools. The Muslims started “Muslim schools”. Muslim and Tamil students who studied together (because they shared the same mother tongue Tamil), got segregated.

Sri Lankan society was thus torn into shreds by communal politics adopted by ambitious political leaders of all communities.

Lack of communication, which stemmed from segregation at the earliest stage of Sri Lankans’ lives, led to misunderstanding and misinterpretation of demands. Even a simple demand for regional autonomy (federalism) by the Tamils was seen as communal and separatist and put down with a heavy hand.

State violence led a Tamil militant movement which almost destroyed the country, till it was put down in May 2009 after a three year, full-scale, brutal war.

Having put down the Tamils, the majoritarian communalists turned their attention to the second minority, the Muslims, who are 8% of the total population of 21 million.

Seen as friends of the majority Sinhalese when the later were fighting with the separatist Tamils, the Muslims got privileges and access to political patronage with which they improved their economic lot. Their businesses prospered. They were in the cabinet and the bureaucracy often in key positions.

But prosperity and clout brought in its train communal envy. The Muslims were accused of indulging in sharp business practices, buying up properties using their greater access finance and of using official power to promote their interest.

Added to this was the influx of Saudi money and the introduction of Saudi Wahabism, which further widened the rift between the Muslims and other communities.

With money coming in, Muslim political parties, which were traditionally confined to Muslim majority areas, now began to mobilize Muslims as a distinct political group even in places where they were in a minority and where they traditionally identified themselves with multi-ethnic national parties.

But mobilization of Muslims in Sinhalese or Tamil majority areas sharpened the rift between the Muslims and the other communities in these areas.

The recent riots in the small towns in the Sinhalese majority Kandy district could be an unintended consequence of communal mobilization for political ends over the last decade or two.