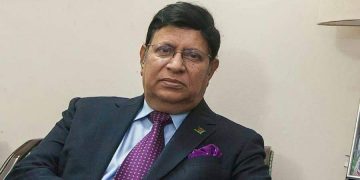 Rohingyas might get radicalized if Myanmar doesn’t take them back, warns Bangladesh Foreign Minister

Rohingyas might get radicalized if Myanmar doesn’t take them back, warns Bangladesh Foreign Minister Dhaka, April 18 (newsin.asia): Bangladesh’s Foreign Minister Dr.A.K.Abdul Momen has warned that if the Myanmar government continues to disregard the Rohingya refugees’ issue, the Rohingyas might get radicalized.

“Myanmar has assured us that it will take back the refugees. It is a friendly neighbor and we trust it. But if it doesn’t take back the Rohingyas,  they might get radicalized.”

Momen hoped that China (which has influence over Myanmar) and ASEAN, will urge the Myanmar regime to take back the refugees. “China is trying to help,” he added.

While having no plans to given citizenship or permanent residency status to the refugees, the Bangladesh government has prepared an island where they could be settled and provided with job opportunities ,the Minister said.

“However, nobody will be forced to settle in the island. Resettlement will be on voluntary basis,” he assured.

Dr.Momen pointed to the possibility of landslides happening in the areas in which the Rohingyas are settled. Many of the 34 refugee camps are located on hillsides which are prone to nand landslides.

Dr. Momen denied that India is pushing 40,000 Rohingyas into Bangladesh.

“Our Foreign Minister had taken up the matter with the Indian counterpart and we have been assured that India will not push them into Bangladesh,” added Mohamad Shahriar Alam, State Minister of Foreign Affairs.

Asked about the Indian Citizenship Bill which is passed will  allow the grant of Indian citizenship to non-Muslims from Islamic countries in the South region on the grounds that they are being persecuted in these countries, Dr.Momen said that Bangladesh has no view on the matter as “it is an internal matter of India.”

But he hoped that India would act in a democratic way as it is   a “great democracy.”

On being asked about the possibility of Bangladesh’s getting into a debt trap vis-à-vis China, Dr.Momen said that China helps build infrastructure. “But the only problem is that we need loans on soft terms,” he added.

State Minister Shahriar Alam  said that when Bangladesh joined the One Belt One Road Initiative (BRI) it was explained to India that the envisaged projects are purely commercial. Indications are that India is not opposed to Bangladesh’s participation in the BRI, Alam said.

Dr. Momen said that Bangladesh, which former US Secretary of State Henry Kissinger dubbed a “bottomless basket”, is today a vibrant economy. It is among the top few in terms of the rate of GDP growth which is now 7.86 %. It is to grew soon at 8.15%. In terms of the return on investment, Bangladesh has recorded the highest in the region.

The Minister attributed this to “women power and the dynamic leadership of Prime Minister Sheikh Hasina.”

“What is required for sustained growth is a mindset of tolerance over-riding caste, religion , race and color differences.”