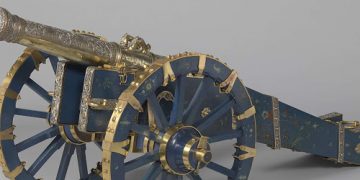 Colombo, October 19: In a report from Amsterdam, dated October 13, Reuters reported that a beautiful ornate cannon, painted in blue and gold, which had been taken away by the Dutch from in 1765 from Kandy, could be brought back to Sri Lanka, at least for display, in 2021.

This is part of a gathering movement in both the ex-colonial countries and countries which were once colonized, to settle the question of historical artefacts which were seized by the conquerors and shipped to their metropolises in Europe from the 17 th., to the 19 th, Centuries.

The Rijksmuseum’s Head of History, Valika Smeulders said that the museum had at least 4,000 objects in its collection from the Dutch empire which spanned three centuries from mid-17 th.,Century onwards. Smeulders welcomed plans by the Dutch government to “right the historical wrong”. The government plans to set up an independent research center to find out where an artefact came from, and how it was obtained. Government would also set up committees to handle restitution requests from other countries.

The Dutch moves to return seized art run in parallel with similar initiatives in France and Germany, all broadly following the 1998 “Washington Principles.”

In 1975, Hemasiri de Silva, the then director of the National Museum of Colombo, published a catalogue of objects that were taken out of the island. The British were the most avid gatherers of Lankan cultural property, says Dr. Nazeema Kmaradeen of the Department of Commercial Law at Colombo University in her 2017 paper on the subject. “Cultural objects from Sri Lanka could be found in over 16 museums in England. The objects in British hands accounted for about half the entire catalogue and numbered well over 3,000. They included statues, coins, ivories, personal ornaments, utensils, boxes, weapons, musical instruments, toys, paintings, masks, manuscripts, and textiles,” she says.

In 2010, Sri Lanka made an official request to various countries and private collectors to return cultural and religious artefacts and statues taken away in colonial times. Among the artifacts sought were the 16th century ivory casket intricately designed with scenes of ancient Lanka (at the Kunsthistorisches Museum in Vienna); an ivory and gold chest with rubies and sapphires embedded in it depicting events from the time of the last Buddhist emperor (Munich Museum in Germany); the bronze figure of a seated Buddha (Royal Scottish Museum in Edinburgh); an ivory cabinet with figures of Adam and Eve engraved during the Dutch period (Victoria and Albert Museum in London); a bronze figure of Avalokiteswara (Cleveland Art Museum in the US); and the Tara Devi (Pattini) statue (British Museum). According to Prof.Kamardeen, the prized 1.43-meter-high statue of Tara, dating back to the 10 th.,Century, was taken out of the Trincomalee-Batticaloa area in 1830 by Governor Sir Robert Brownrigg and handed over to the British Museum.

There is the UNESCO Convention on the Means of Prohibiting and Preventing the Illicit Import, Export and Transfer of Ownership of Cultural Property (1970) which tries to curb trafficking in valuable artefacts. Sri Lanka, Portugal, the Netherlands, and the UK are parties to the convention. The Convention mandates State parties to help each other recover and return stolen property when requested to do so by the source country. However, the convention only covers the movement of objects after 1970, and therefore, does not have any bearing on objects taken during the colonial era, Kamardeen points out.

The UNIDROIT Convention on Stolen or Illegally Exported Cultural Objects (1995) provides a maximum time limit of 50 years for the return of a cultural object from the date its location and possessor become known.

In Sri Lanka, the Antiquities Ordinance (1940) provides for the preservation of antiquities, sites and buildings of historical or archaeological importance. However, it only contains provisions for cultural objects ‘discovered’ in Sri Lanka and not those held abroad. The Cultural Property Act No. 73 of 1988 controls the export of cultural property through a licensing scheme for those dealing in cultural property.

Sri Lanka could launch “cultural diplomacy” to get its artefacts back, but some countries may resort to bargaining as they do in normal diplomacy. “For example, Belgium was willing to return objects to the Democratic Republic of Congo (DRC), provided that its mineral interests in the DRC were protected!” Kamaradeen recalls.

“Cultural diplomacy efforts should be broadened to include education on the unique value of cultural objects to their countries of origin, and to begin negotiations on how these objects may be returned. In other words, states should work to show the importance of own cultural heritage in seeking restitution of stolen cultural objects,” she suggests.

Dr. Kamaradeen urges government and civil society to work together to educate people about the cultural importance of lost property. “This will strengthen restitution efforts by increasing public awareness and pressure in host countries to return cultural

But Nicholas Thomas, Director of the Museum of Archaeology and Anthropology, Cambridge points out that in parts of the Pacific, for example – are positive about the representation of their cultures in prestigious international museums! There is also the broader argument over the value of museums themselves: the vast scope of the British Museum’s collection means that objects from diverse cultures can be viewed alongside each other, compared and contrasted. To visit a museum of its kind is like walking into the pages of an encyclopaedia. Objects and curiosities that have been gathered up over centuries, from territories near and far, provide a universal type of experience. This is part of the enlightenment spirit, of sharing and learning about each other’s culture.

Many developing countries have no facilities to preserve and protect artefacts. The sword of a Kandyan king was stolen from the Colombo Museum in 2012. Sri Lanka has a number of museums, but how many of them are secure and well-maintained? The staff may lack training in preservation and security.

Museums abroad are scared of demands for the return of artefacts as they could open the floodgates. In 2011, Egypt demanded the return of the bust to form part of its planned Grand Egyptian Museum, despite the ownership of the object having passed to Boston in the original division of finds. There’s the Koh-i-Noor Diamond (circa 3,000 BC), a 105-carat diamond in the possession of the British Crown Jewels despite the fact that India has demanded its return since Independence in 1947, Kamardeen points out.

UK has not responded positively to requests made by the Lankan government in 1970 and again in 2013 to return property taken during the colonial era. The British Museum Act (1963) forbids the museum from disposing of its holdings, except in a very limited circumstances

To get round this problem, Kamardeen suggests a joint approach, say with India. “Both national laws (e.g. in the UK) and international law evolve as a result of normative pressure; they are not static. Sri Lanka can work with other former colonies (perhaps starting with other South Asian countries) to initiate dialogue on how existing law could evolve and potentially be changed to allow for the return of cultural objects.”