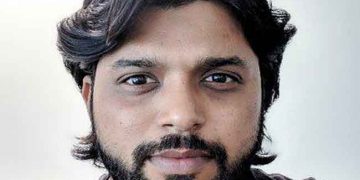 Colombo, May 2 (Ada Derana): A Reuters photographer, who was arrested for allegedly trying to forcibly enter a school in Katana, has been remanded until May 15 by the Negombo Magistrate’s Court.

Iraqi-born Siddiqui Ahamed Danish, a Reuters photographer based in India, was reportedly arrested at around 12.30 p.m. today (02), based on a complaint received by the 119 emergency hotline, after he allegedly forcibly entered the school.

He had reportedly arrived in the country from India in order to cover the aftermath of the Eastern Sunday suicide bombings in Sri Lanka.

Danish  had arrived at the school in order to obtain information regarding one of its students, who was killed in the bombing at the St. Sebastian’s Church in Katuwapitiya on April 21, when several parents at the school had grown suspicious and called 911.

Acting on the information, Katana Police officers arrived at the school and arrested the journalist.

He was produced before the Negombo Magistrate’s Court today and ordered remanded until May 15.