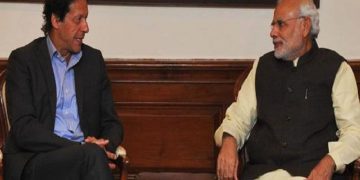 Responding to Modi’s challenge to prove a Pathan’s commitment to his word, Imran Khan urges Modi to give “peace a chance”

Responding to Modi’s challenge to prove a Pathan’s commitment to his word, Imran Khan urges Modi to give “peace a chance” Islamabad, February 24 (NDTV): Pakistan Premier Imran Khan on Sunday asked Prime Minister Narendra Modi to “give peace a chance” and assured him that, true to his word, he will act immediately if New Delhi provides Islamabad with “actionable intelligence” on the Pulwama terror attack.

The appeal came just a day after PM Modi threw a challenge to Mr Khan, asking him to act honorably by bringing to justice those behind the strike, if he was indeed a “Pathan’s son”.

Recalling his conversation with Khan during a congratulatory call after he won the Pakistan elections, PM Modi said he told him “let us fight against poverty and illiteracy” and Khan gave his word – saying he is a “Pathan’s son” who spoke and acted in truth.

Pathans, an ethnic group with roots in Iran, are known for their deep sense of honor and self-respect.

PM Modi at the rally in Rajasthan also said, “There is consensus in the entire world against terrorism. We are moving ahead with strength to punish the perpetrators of terrorism… The scores will be settled this time, settled for good…This is a changed India, this pain will not be tolerated…We know how to crush terrorism.”

According to news agency PTI, a statement released by the Pakistan Prime Minister’s Office on Sunday said, “PM Imran Khan stands by his words that if India gives us actionable intelligence, we will immediately act.”

PM Modi should “give peace a chance”, Mr Khan said in the statement.

Last week too, Mr Khan assured India that he would act against those responsible for the Pulwama attack, carried out by Pakistan-based terror group Jaish-e-Mohammed, if it shares “actionable intelligence” with Islamabad, but warned New Delhi against launching any retaliatory action.

India said Mr Khan’s offer to investigate the attack if provided proof is a “lame excuse”.

“It is a well-known fact that Jaish-e-Mohammed and its leader Masood Azhar are based in Pakistan. These should be sufficient proof for Pakistan to take action,” the Ministry of External Affairs said.

“In the horrific attack in Mumbai on 26/11, proof was provided to Pakistan. Despite this, the case has not progressed for the last more than 10 years. Likewise, on the terror attack on Pathankot airbase, there has been no progress. Promises of ”guaranteed action” ring hollow given the track record of Pakistan,” it said.