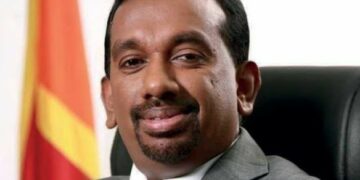 Minister of Agriculture Mahindananda Aluthgamage told reporters yesterday that the Presidential Commission of Inquiry that probed the attack has clearly stated in its report that the previous government should be held responsible for failing to prevent the deadly bombings.

The April 21 attack, perpetrated by an Islamist outfit known as the National Thowheed Jamath (NTJ), killed 269 people and injured over 500. The Yahapalana (Good Governance) administration of then President Maithripala Sirisena and Prime Minister Ranil Wickremesinghe stood accused of failing to prevent the massacre despite having received intelligence of an impending terrorist attack.

“When the report says ‘former government’, it means the blame should be put not just on Sirisena and Wickremesinghe but on the entire cabinet which includes [incumbent opposition leader] Sajith Premadasa, [former ministers] Lakshman Kiriella, Kabir Hashim and Champika Ranawaka,” said Aluthgamage.

“So we asked the president to take legal action against the entire cabinet of ministers over the Easter bombings,”he added.

Former minister Rishad Bathiudeen was arrested last Saturday (24) for allegedly aiding and abetting the suicide bombers and for doing business with them, said Alutghagame.

As a followup to Bathiudeen’s arrest, the agriculture minister said, authorities must look into how Mohamed Yusuf Ibrahim, the businessman father of two of the suicide bombers, became a national list candidate of the opposition Janatha Vimukthi Peramuna (JVP).

Ibrahim, a wealthy spice trader, was reportedly well-acquainted with a number of politicians in both the government and the opposition.

“This is not an attempt to suppress the opposition. The presidential commission has recommended that proceedings be initiated against these people. When we do that, we get accused of suppressing the opposition,” said Aluthgamage.

He added that opposition leader Premadasa who spouts much rhetoric about the Easter attack must also be held accountable and produced before the courts with the others.

These revelations about the attack came to light after the ruling Sri Lanka Podujana Peramuna (SLPP) government came into power, he further said.

“If Gotabaya Rajapaksa had not become president, there wouldn’t have been an Easter Sunday commission,” he said.

The presidential commission of inquiry (PCoI) was appointed by former president Sirisena. The commission recommended in its final report that criminal proceedings be initiated against Sirisena and other officials. Notably, the PCoI did not recommend action against ex-PM Wickremesinghe, who Sirisena had politically fallen out with in the months leading up to and after the 2019 bombings.

The security and intelligence lapses that allowed the attack to take place was blamed on the animosity between the two, in particular Sirisena’s alleged refusal to invite Wickremesinghe to meetings of the national security council.

In its report, the PCoI faulted Wickremesinghe for not raising the issue of not being invited to security council meetings in parliament or cabinet and also for an alleged “lax approach” to Islamic extremism.

Sirisena is now a member of Parliament representing the SLPP-led government, of which his Sri Lanka Freedom Party (SLFP) is a constituent, though unofficially tensions between the SLPP and SLFP appear to be at an all-time high.

Wickremesinghe’s UNP failed to secure a single seat in parliament at the 2020 general election following the departure of Premadasa and a large chunk of the party membership who went on to form the now main opposition Samagi Jana Balavegaya (SJB).