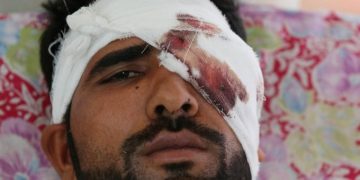 As the use of pellet guns continues unabated in the Valley despite the Ministry of Home Affairs saying it would be used in the “rarest of rare” cases, the world is getting darker for people who have been partially or fully blinded by pellets in security forces action during the over-two-month-long unrest in Kashmir, with many of the victims still unable to regain vision despite undergoing many surgeries.

Fourteen-year-old girl Insha Mushtaq, whose eyes were devastated by pellets in Central Reserve Police Force firing in Shopian district on July 9, is unlikely to see the world again.

After being operated on by team of doctors at Srinagar, AIIMS in New Delhi and Aditya Jyoti Hospital in Mumbai, there has been no improvement in her vision.

Dr S Natarajan, a leading retina surgeon presently in the Valley, said the doctors had given up on Insha.

“But I still took a chance and operated on her in Mumbai. However, she still cannot see anything,” he said adding half of Insha’s left retina had been destroyed by the pellets while the remaining half had blood stuck to it.

Dr Natarajan has performed 104 surgeries on pellet victims from the Valley.

“I doubt whether Insha, who aspires to be an eye doctor, can see the world again,” he said.

Dr Natarajan said doctors now have the option of inserting an artificial eye.

“But as of now, eye transplant is not practiced in India.   Let’s see if it works.”

Over 3,000 people, mostly youths and teenagers, have been hit by pellets fired by security forces on protestors after the July 8 killing of 21-year-old Hizbul Mujahideen commander Burhan Wani triggered an unrest.

As many as 800 people with pellet injuries in eyes have been treated in the SMHS hospital, Kashmir’s main hospital, since July 9. Twenty-five of them were hit in both eyes and five lost their eyesight.

Danish Rajab, whose eyes were hit by pellets, underwent his third surgery at the SMHS hospital this week.

“His eyes were damaged beyond repair and the ophthalmologists are not optimistic about him regaining his vision,” Danish’s cousin Owais said.

Asif Dar (22) underwent three surgeries including one at L V Prasad Eye Institute, Hyderabad, but is yet to regain his vision.

“Everything appears blurred. I can  slightly see some things with my left eye. I am very unfortunate that I can’t even properly see the faces of my parents,” Asif said.

And on Thursday, the Jammu & Kashmir High Court rejected a plea seeking a ban on the use of pellet guns.