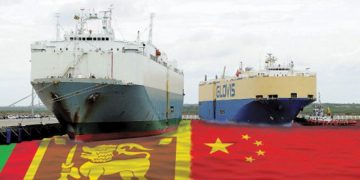 Sri Lankan President Gotabaya Rajapaksa has told the Indian Defense Journal “Bharat Shakti” that he will request China to renegotiate the lease period of Hambantota port which is now an “unacceptable” 99 years.

“We should never have given control of the port to China. That was a mistake. Even though China is a good friend of ours and we need their assistance to develop, I’m not afraid to say, that was a mistake. I will request them to renegotiate and come with a better deal to assist us. Today, people are not happy about that deal. We can think of one year, two years, five years. We have to think of the future,” the President said.

“Giving a small piece of land for investment is a different thing. To develop a hotel or a commercial property is not a problem. That’s not an issue. The strategically important, economically important harbor, giving that is not acceptable. We should have control. We have to renegotiate.”

“Giving a terminal for an operation is a different thing, giving some location to build a hotel is different, not the control over a very important place. It is not acceptable. That is my position,” the President stated.

The President’s statement gives rise to several questions. Firstly, it is not clear as to whether the President is against any lease, long or short, or he wants a scaling down of the lease period from 99 year to a more acceptable level. Secondly, the question if China will agree to renegotiate arises because it is in a strong position in Sri Lanka being its single biggest foreign investor. Thirdly, if China does agree to renegotiate, what kind of price Sri Lanka would have to cough up to swing a new deal?

On the question of China’s willingness to re-negotiate, one can go by information from other parts of the world. China does renegotiate.  According to the Economist Intelligence Unit, Pakistan had requested the shelving of a US$2 billion coal power project and the reduction of the Chinese loan for a rail project from US$ 8.2 billion to US$ 6.2 billion. Myanmar had asked Beijing to bring down a loan for a deep water port from US$ 7.3 billion to US$ 3.5 billion level (for the port and economic zone). It also appears that ownership will be based on a 70-30 split, with Myanmar not having to provide sovereign backing for the fund.

According to the RWR Advisory Group, at least 234 Belt and Road Initiative (BRI) projects had encountered problems by 2018 as a result of public protests, shifting political sensitivities, differences over financing and other issues. China’s opaque approach in dealing with these projects has also engendered skepticism about the potential for local corruption, the RWR Advisory Group added.

The Hong Kong International Arbitration Centre (HKIAC) reported that the number of arbitrations involving parties from countries participating in the BRI rose to 124 in 2017 from 70 in 2016. Arbitrations between Chinese companies and parties to BRI projects rose to 38 in 2017 from 12 in 2016.

China itself has set up international commercial courts in Xian, capital of northwest China’s Shaanxi province, and Shenzhen, in the Guangdong province, to handle international business disputes arising from BRI projects.

The Rhodium Group, which studied 40 Chinese debt negotiations in 24 countries involving debts totaling US$ 50 billion, found that there were cases of deferment, forgiveness, and refinancing. According to “Forbes”, China has forgiven loans to the tune of US$ 10 billion.

“Write-offs are often conceded by Beijing without a formal renegotiation process. Instead, Beijing usually unilaterally agrees to cancel part of a borrowing country’s debt, even when there are few signs of financial stress on the part of the borrower. Such cases of debt forgiveness are therefore probably used to signal support to the recipient countries, and improve bilateral relations,” the Rhodium Group noted.

“Negotiation outcomes are more diverse where financial stress proves more manageable. Beijing has repeatedly agreed to a mix of repayment deferments and some degree of refinancing (as in Mongolia in 2017), although often under harsher terms (as in Angola in 2015, or Sri Lanka in 2012). And where external events such as changes in leadership, or large movements in commodity prices, prompted renegotiations, Beijing was often compelled to agree to term renegotiations, usually to borrowing countries’ advantage (in Ecuador in 2017-2018, and in Ghana in 2014-2015).”

“Another key factor seems to be the leverage generated by leadership changes in borrowing countries, which allows incoming governments to start renegotiations with stronger negotiating influence, and hence a real ability to demand a change in terms. In the case of Ecuador, the new government demanded and obtained a renegotiation of lending terms, arguing that its predecessors had agreed to unfair conditions that were no longer tolerable,”  the Rhodium Group pointed out.

A clue to the kind of settlement President Gotabaya Rajapaksa might want is available in former Opposition Leader Mahinda Rajapaksa’s statement criticizing the 2017 deal on Hambantota port which included the 99 year lease.

In the statement comparing the two deals, Mahinda Rajapaksa said: “ A framework agreement has been signed by the government with China Merchant Co to lease out the entire free port for 99 years for a payment of 1.08 billion USD on a 80%-20% equity sharing basis. No other income will accrue to the Ports Authority for 15 years, after which they will receive dividends for their 20% stake only if dividends are declared. The lease will be extendable for another 99 years and a 44 hectare artificial island outside the port has been included in the deal.”

“There is provision for the construction of another 20+ berths and the rights over these too have been given to the lessee. The amount of the lease seems to have been based only on the construction cost of the port without an accredited international valuation reflecting the strategic location value of the port, the value of the 99 year period, its 2,000 hectare land, the oil tank farm and the value of its present commercial operations.”

“This bid has been accepted in a situation where the other company China Harbor Co. had put in a much more favorable bid to lease the free port on a 65-35 equity sharing basis for 50 years with an upfront payment of 750 million USD plus the payment of all the charges they had earlier agreed to with regard to the container terminal management contract. The government has chosen the least favorable bid despite the Ports Authority having recommended the other bidder.”

“The agreement that my government negotiated with both China Harbour Co and China Merchant Co to manage the Hambantota container terminal for 40 years is the best deal yet.”

“A 99 year lease impinges on Sri Lanka’s sovereign rights because a foreign company will enjoy the rights of the landlord over the 2,000 hectare free port while operating the entire harbor as well.”

According to Chinese sources, any attempt to renegotiate the Hambantota deal might be met with a demand for compensation in some form, or China may offer an other financial package at a favorable rate of interest to mollify the Lankan government.

As the suspension of work at the Colombo Port City in 2015-2016 on corruption charges  showed, the Chinese company involved in Hambantota  will suffer losses and it should be compensated for this.

Further, cancellation or modification of agreements already signed and sealed, would leave a bad impression on the minds of present and potential foreign investors who would become reluctant to invest in Sri Lanka. This would work against Gotabaya’s plans to attract FDI.