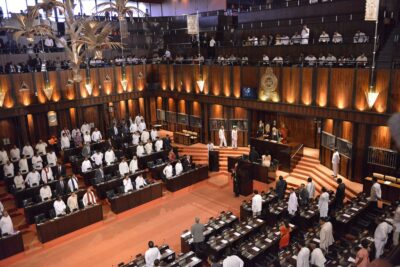 Colombo, Oct 27 (DailyMirror) – Sri Lanka’s Elections Commission has received an increase in applications of new political parties, signalling a rift in some of the major parties already in existence, with sources saying Sri Lanka had now bypassed India with the number of political parties registered in the country.

According to senior sources from the Elections Commission, Sri Lanka already has an estimated 70 political parties registered in the country, a number bypassing even the number of registered parties in India, and last year alone a further 200 applications were received out of which only five were accepted.

Applications are usually called in June every year and once a party application is rejected, they cannot re-apply for another two years.

However, some new parties, including one in the north, whose application was rejected last year due to being unable to meet the minimum requirements have already applied again this year, ignoring the basic procedure of having to even wait for two years.

Sources alleged this was because they were attempting to use the connections of those already in power to have their way.

The SLFP, a coalition partner of the government, who has already signalled they will contest solo in future elections including the provincial council elections, is facing a split in its lower ranks as one of its Pradeshiya Sabha members has put in an application to register a new party under the name ‘Ilankai Tamilar Sudanthira Munnani’.

The member who has made the application is Sathasivam Ramanathan, father of SLFP MP Angajan Ramanathan and is also the private secretary to the MP and is a member of a Pradeshya Sabha in Jaffna, representing the SLFP.

Sources said this application was made to register a new political party in the north, where the SLFP had already won a seat in the general elections. This application, sources said has signalled a split in the SLFP lower ranks.

S. Ramanathan had made an application to register his political party last year, but since his party did not meet the basic requirements, it was rejected. He has made a fresh application again this year, in documents seen by the Daily Mirror, bypassing the protocol of having to wait for a minimum of two years.

“The registration of such parties shows that there is trouble in all these major political parties and members are trying to split away and form parties of their own. The number of political parties registered in Sri Lanka is already very high,” a senior source from the Elections Commission said.