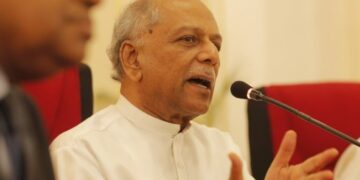 Colombo, May 10: At a time when a national debate is taking place on the future of the Sri Lankan Provincial Council (PC) system, another committee has been appointed to recommend electoral reforms.

For the second time in two decades, Leader of the House, Foreign Minister Dinesh Gunawardena heads a Parliamentary Select Committee (PSC) appointed to identify appropriate reforms to election laws and the electoral system and to recommend necessary amendments. This time he heads the 14-member Committee, announced by Speaker Mahinda Yapa Abeywardena last week.

In 2003, a PSC headed by Dinesh Gunawardena was given the same task and the Committee came up with far reaching recommendations on electoral reforms. In its first report, the PSC proposed a mixed electoral system combining proportional representation and first-past-the-post system. Hence, the new PSC will have a fairly easy task, as the work will be limited to updating the original proposals with required amendments to further strengthen them.

The first-past-the-post system, which lasted nearly 50 years since introduction of adult franchise in 1931, was cost effective, less violent and elected a representative of a particular electorate. It meant that if a representative did not fulfill the desires of the people, the people could vote for a different representative at the next election. It also allowed for single party governments, which meant party policies did not have to be watered down. The opposition was equally vibrant in such a system.

Acknowledging those shortcomings, the architects of the 1978 Republican Constitution established a system of proportional representation for electing representatives to the Parliament and other electoral bodies. However, the system of proportional representation could not be considered a perfect system of democratic Elections. A massive district is made an electorate where only candidates with huge sums of money can spend on the election campaign. Potential candidates without huge campaign funds are unable to do so.

The majority view of the 2003 PSC favored reforms to the present system leading towards a mixed system with a combination of first-past-the-post and proportional representation systems. Concerns were raised in respect of a proposed change of the present system by minority parties and communities of interests who urged the committee to ensure equitable representation in the system that is finally proposed.

Freezing the number of PC members

Contrary to the PSC recommendations on freezing the number of Provincial Council members at the original level introduced in 1988, the membership of local government bodies almost doubled after delimitation of constituencies. In the last local government elections in February 2019, the number of members elected was nearly double the previous number.

The 2003 Committee unanimously agreed that there should be no increase in the membership of each Provincial Council and the number of members should be frozen as at present level. The Committee was also in agreement that it is appropriate to hold elections to all Provincial Councils on a single day.

Speaking during an adjournment debate in the House, Dinesh Gunawardena said it was the government’s belief that there should be an electoral system, under which a majority of MPs should be elected under the first-past-the post system and the rest on proportional representation system.

The proposed mixed system is undeniably a welcome change to the electoral system. As this is an issue pending for decades, early steps must be taken to implement the recommendations of the new PSC when it submits its report by November 2021.