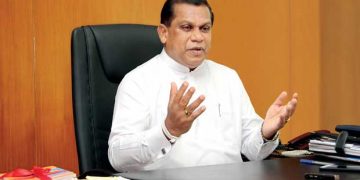 Colombo, March 8 (newsin.asia): Senior United National Party (UNP) MP, Ranjith Madduma Bandara, has been sworn-in as Sri Lanka’s Minister of Law and Order in the context of the need to have a full time Law and Order Minister given the anti-Muslim riots sweeping Kandy district in Central Sri Lanka.

The portfolio had been held by Prime Minister Ranil Wickremesinghe temporarily.

Maddum Bandara was Chairman for District Development Council from 1981 to 1988 May; Minister of Agriculture,Irrigation,Sports and Youth Affairs, Uva Provincial Council for 1988 May to December; and Member of Parliament for Monaragala Distirct from 1989.

The appointment of Madduma Bandara enraged Field Marshal Sarath Fonseka, currently Regional Development Minister ,who was to be appointed Law and Order Minister to pursue corruption and criminal cases against former President Mahinda Rajapaksa and his followers.

Fonseka said that his appointment was thwarted by corrupt elements in the Sri Lanka Freedom Party (SLFP) headed by President Maithripala Sirisena who are in cahoots with Rajapaksa and his new outfit the Sri Lanka Podujana Peramuna (SLPP).

Fonseka and Rajapaksa are at loggerheads because Rajapaksa put him in jail for breaking the Army Act and even attempting to stage a coup. but he was pardoned and released prematurely under international pressure.