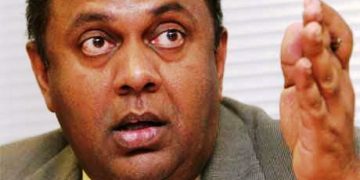 In a statement issued on Sunday, Samaraweera refuted the Joint Opposition leader’s  criticisms point by point:

Criticism 1:. The Office of Missing Persons will not be a part of Sri Lanka’s State law enforcement and justice system, but an independent body incorporated by parliament which gives its members the power to function outside the normal rules and regulations that guide state institutions.”

Response: The Bill outlines four main functions for the OMP: (i) searching and tracing of missing persons, (ii) clarifying the circumstances in which such persons went missing and their fate, (iii) making recommendations to relevant authorities in order to reduce incident of missing and disappeared persons, (iv) identifying proper avenues of redress. As such, it is not a law-enforcement or judicial agency but a truth-seeking investigative agency.

Created by Parliament, the OMP is like the Bribery Commission and Human Rights Commission which responded to specific needs in society. Salient points of the legislation include:

The OMP must submit annual reports to Parliament, and those reports will be made public.

Criticism 2: Even though it is described as an ‘office’ the proposed OMP will be a tribunal for all practical purposes which can examine witnesses, issue summons and hold hearings. Its officers can enter without warrant, at any time of day or night, any police station, prison or military installation and seize any document or object they require for investigations. Anyone who fails or refuses to cooperate with the OMP may be punished for contempt of court.”

Response: The Office of Missing Persons is a truth-seeking investigative agency. It does not make judgements on disputes. In fact, the legislation states that “the findings of the OMP shall not give rise to any criminal or civil liability.” Its primary function is to establish whether a missing person is dead or alive and, if they are dead, discover when, how and where they died.

Other government agencies, including the Human Rights Commission, Commissions of Inquiry and Parliament’s Petitions Committee, have similar powers and similar provisions relating to contempt for failure to cooperate. For example, the Petitions Committee is empowered by Section 128 of Parliament’s Standing Orders to “summon before it and question any person, call for and examine any paper, book, record or other document and to have access to stores and property.”

In addition to these powers, by statute, the Human Rights Commission also has the power to “enter at any time, any place of detention, police station, prison or any other place in which any person is detained by a judicial order or otherwise, and make such examinations therein or make such inquiries from any person found therein, as may be necessary to ascertain the conditions of detention of the persons detained therein.”

Similarly, the OMP only has powers to enter places of detention. It can, however, make an application to the Magistrate to issue a warrant for the Police or the OMP to search any premises suspected to contain evidence relevant to an investigation being conducted by the OMP.

Criticism 3:. The seven ‘members’ of the OMP are to have experience in fact finding and expertise in human rights law and international humanitarian law which means that the appointees will for the most part be representatives of Western funded NGOs or those who have worked with Western sponsored international war crimes tribunals.

Response: As noted above, OMP members will be experts in human rights appointed by the Constitutional Council. The bill explicitly prevents any conflict of interest. It says that if a member “is found to have a conflict of interest, which in the opinion of the President, formed on the recommendation of the Prime Minister made in consultation with the Speaker and the Leader of the Opposition, conflicts with his duties as a member of the OMP”, then he or she will be removed by the President.

Criticism 4:  According to Section 21 of the draft legislation, the OMP will have the power to receive funding directly from any foreign source.

The legislation states that “the State shall provide the OMP with adequate funds to enable the OMP to discharge the functions assigned to it by this Act. Such funds shall be charged on the Consolidated Fund.”

However, due the corruption, disastrous economic management and debt the Rajapaksas left behind, the government may not be able to allocate enough money to deal with the tens of thousands of cases of missing persons. Therefore, like other government agencies, the OMP will be able to secure technical and financial assistance from abroad. This funding will be completely transparent and, as noted above, it will be audited by the Auditor-General.

It is ironic that Mahinda Rajapaksa, who entered into many agreements for foreign funding, brought down foreign judges like Justice Bhagwati for the IIGEP in 2006 and whose crony, Wimal Weerawansa, depends on funds from abroad should make foreign funding an issue.

Criticism 5. The OMP can acting on its own, enter into agreements with foreign persons or organisations concerning its work.

Response: Corporate bodies are empowered to enter into agreements with foreign parties. All these agreements will be subject to Sri Lankan law, oversight and the Constitution.

Criticism 6. The ‘members’ of the OMP can establish units and divisions and delegate their powers and functions to those entities. They can also can appoint and dismiss staff and consultants. It is not specified in the draft law that the members or staff of the OMP have to be Sri Lankan citizens.

Response: The OMP will require technical expertise that is not available in Sri Lanka. This is why previous governments, including Mahinda’s, have brought down foreign investigators and forensic experts such as those from Scotland Yard or legal experts like Desmond de Silva, Geoffrey Nice and Edward Crane. Many other such bodies around the world use foreign experts and it would be self-defeating not to benefit from their expertise. In fact, at this time when the UK is in turmoil, it is their central bank head, a Canadian, who is providing desperately needed stability and confidence.

Obtaining foreign technical assistance will, in the long run, help to build the capacity of local personnel who will benefit from training especially in such areas as forensics, and in future, Sri Lankan experts in these areas will be in a position to provide and share knowledge with other countries which require such expertise.

However, the Constitutional Council is bound by the Act to “ensure that the composition of the OMP reflects the pluralistic nature of the Sri Lankan society”. Therefore, it is clear that the bill intends for a Sri Lankan process with foreign expertise as and when necessary.

Criticism 7. Complaints can be received not only from relations and friends of missing persons but from any interested party both local and foreign.

Response: Any Sri Lankan citizen going missing is a tragedy. It is the government’s duty to investigate and determine the fate of any of its citizens who are missing. We are responsible for the safety and welfare of our citizens. This is a primary duty of the State. If citizens go missing we must find them or find out what happened to them. Therefore, the government welcomes any information that could alert us to the fact that a Sri Lankan citizen is missing and any information that could help discover what happened to them

Criticism 8. Government bodies at all levels including the armed forces and intelligence services are mandatorily required to render fullest assistance to the OMP and the provisions of the Official Secrets Act will not apply to the proposed institution.

Response: The Bribery Commission, Human Rights Commission, Presidential Commission of Inquiry, Parliamentary Committees and many other bodies have similar provisions and powers. There is nothing new or unusual. The OMP merely has the required powers it needs to fulfill its duties.

Criticism 9. According to Section 12 (c) (iii) the OMP can admit as evidence any statement or material disregarding the criteria laid down in the Evidence Ordinance.

Response: The purpose of the Evidence Ordinance is to govern the law relating to evidence in judicial proceedings. The OMP however is not a judicial body and it does not seek to make a judicial pronouncement with regard to a civil or criminal matter. As repeatedly noted above, all it is meant to do is to locate a missing person, or, if they are dead, establish the circumstances of their death. Therefore, as the OMP’s function is a truth-seeking one and it should have as much information as possible available to it, its procedures should not be as onerous as the courts, which are of course empowered to judge and punish. The Human Rights Commission and Commission of Inquiry also empower those bodies to entertain statements notwithstanding the Evidence Ordinance.

Criticism 10:   The provisions of the Right to Information Act will not apply to the work of the OMP. No court, not even the Supreme Court can order any officer of the OMP to submit to courts any material communicated to him in confidence.’

Response: The purpose of having an exclusion of the Right to Information Act is to ensure that those who know the fate of missing or disappeared persons can transmit that information without fear. This is necessary because the OMP is a mechanism designed to discover the truth of a missing person’s fate and not act as a prosecutorial or judicial body.

However, as per Section 14A of the Constitution, only information that is communicated in confidence will be excluded from the provisions of the RTI Act. All other information will be subject to the Right to Information Act.