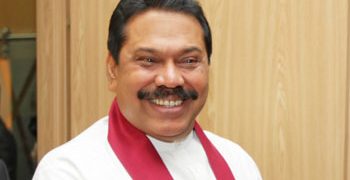 Colombo, September 4 (NIA): The Rajapaksa faction of the Sri Lanka Freedom Party (SLFP) boycotted the convention held to mark the 65 th. anniversary of the party at Kurunegala on Sunday, thereby keeping up the inner party struggle for power between former Sri Lankan President Mahinda Rajapaksa and the incumbent President and party Chairman, Maithripala Sirisena.

While Rajapaksa was away in Malaysia to attend a conference, the other members of the group who call themselves the “Joint Opposition” in the Sri Lankan parliament, stayed away from the meeting, barring one or two notable exceptions.

The convention presided over Sirisena attracted a large crowd, larger than expected, because in the popular mind, he is not considered a mass leader and does not have full control over the party machine. But all his ministers ,who were till the other day with Rajapaksa, were present.

In his speech, Sirisena defended the national unity  government’s policies and emphatically denied that he is surrendering to the dictates of the international community on reconciliation with the Tamil minority, and the mechanisms for war time accountability to be set up in fulfillment of the UN Human Rights Council’s resolution of October 1, 2015.  He said he is under no pressure from anybody to act in a particular way. He promised that he would not bow to pressure, if there were any.

The party Chairman further said that the local bodies’ elections, long postponed, will be held within the first six months of 2017 and that the SLFP will contest separately on the “hand” symbol. The SLFP under him is in alliance with the United National Party (UNP) and is part of the ruling Rainbow Coalition.

Stressing the need to bring about unity in the party, especially in the context of the next local bodies’ elections, Sirisena called upon party men to eschew petty politics and join hands to strengthen the SLFP.

The Rajapaksa faction is at odds with the Sirisena faction over the latter’s alliance with the UNP, which has been the SLFP’s historical rival. But Sirisena is keen on the continuation of the alliance for the sake of bringing about the promised constitutional reforms; effecting ethnic reconciliation; and securing international economic and political support for Sri Lanka ,which it lacked during Rajapaksa’s Presidency.