Rahul Gandhi promises not to attack his rival, the Left Front, in Wayanad

Rahul Gandhi promises not to attack his rival, the Left Front, in Wayanad 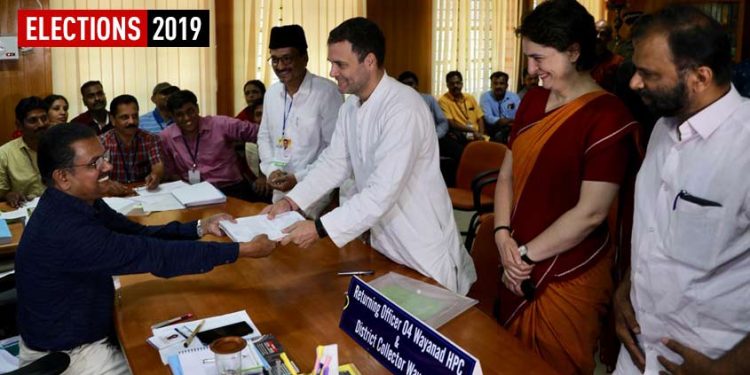 Wayanad, April 5, (PTI): Congress president Rahul Gandhi on Thursday said he will “absorb all the attacks” of the CPM, which is miffed over his Wayanad candidature in Kerala, and will not speak against the Left parties during his campaign.

Speaking to reporters after filing his nomination papers for the Wayanad Lok Sabha constituency, Gandhi also said he is contesting from seats in north and south to “send a message”.

The 48-year-old Congress chief is contesting from Kerala’s Wayanad in addition to his traditional stronghold of Amethi in Uttar Pradesh.

“The CPM and the Congress have been locked in a fight in Kerala. This will go on. I understand that the CPM has to fight me. But, I am not going to say a word against the CPM. I am here to send a message of unity that south India is important, and I fully understand that the CPM has to attack me. So, I will absorb all their attacks with happiness, but from me you will not hear a word against them in my campaign,” the Congress chief said.

There were two main issues faced by the country–“lack of jobs and agrarian crisis”, he said.

“Farmers are unaware of what the future holds for them. Youngsters are running from state to state searching for jobs and (Prime Minister) Narendra Modi has failed on both the fronts,” Gandhi said while attacking the PM.

Gandhi also said, “The country had faith in the prime minister when he said he would be the chowkidar (watchman). But, the chowkidar himself has given Anil Ambani Rs 30,000 crore of air force money.”

“He (Modi) has stolen money and has given to Anil Ambani who has no experience (aircraft manufacturing). Anil Ambani is in Rs 45,000 crore debt,” Gandhi alleged, once again attacking the NDA government over the Rafale deal.

The government has repeatedly denied any corruption in the Rafale deal.

On his candidature from Wayanad, Gandhi said he wanted to “send a message that India is one.”

“I have come to Kerala to send a message that India is one. South, north, east, west, centre. All are one. There is an assault taking place across the country by the RSS and BJP. I just want to send a message and I will stand from south India and north India. My aim was to give a message.

“There is a feeling in south India that by the way in which the Narendra Modi government is functioning, their culture, language, history all are being attacked. So I wanted to give a message that I will fight from north and south,” Gandhi said.

(The featured image at the top shows Rahul Gandhi filing his nomination papers in Wayanad, Kerala)