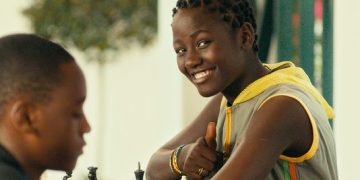 Queen of Katwe: A feel-good sports biopic that also portrays the harshness of poverty in urban Africa

Queen of Katwe: A feel-good sports biopic that also portrays the harshness of poverty in urban Africa The opening scene in Mira Nair’s Mississippi Masala (1991) begins in Kampala, Uganda. Set in 1972, it’s the story of an Indian family being ousted (as were hoards of others) from the country by the ruthless dictator Idi Amin, and their new lives as immigrants in America. Queen of Katwe, Nair’s latest release, too begins in Kampala, but the setting is contemporary. The political upheaval and Amin-sponsored genocide set the country back in the ‘70s, and even in the present day, it remains a third-world struggler, where there’s more misery than hope.

The tiny African country has inspired filmmakers to explore themes either on or around the nation. Amin’s reign – more specifically, his association with his Scottish physician – was the theme in The Last King of Scotland (2006). Mississippi Masala is about hope being lost in attempting to return to the place that kicked you out. Queen of Katwe is a story of hope deep in the country’s underbelly.

Nair’s association with Uganda has stayed with her since the early ‘90s, making it a second home. That familiarity put her in the best position to base a film almost entirely in Kampala – the true story of a young girl from the slums who became a chess champion.

Phiona Mutesi grew up in Katwe, one of Kampala’s largest slums. Forget chess. Education itself was a far-fetched dream when her dad succumbed to AIDS, meaning she and her brother had to drop out of school and sell maize on the streets. Her day would begin at 5 am, when she would walk two hours to fetch water. She discovered chess via her brother, who would attend sessions in the slum conducted by Robert Katende, a Father Teresa of sorts, who dedicated his life towards rehabilitating slum children through sport. A bowl of porridge at the end was the incentive for kids to join in, and when Katende one day saw a shy Phiona peering from outside, he asked her to come in, and the rest was history.

Phiona’s sharp aptitude for the game and ability to out-think her opponents and beat much older kids marked her out as a phenomenal talent. Convincing the chess federation to allow slum kids to compete with the elite school children was the biggest hurdle for Katende. But he was as relentless in pursuing this collective goal as Phiona was in knocking down her opponents. Like in all great sports stories, the struggle and triumph of the underdog forms the basis.

When basing a movie on a sport, chess would probably never figure, because it’s not a spectator sport. This film is careful not to dwell too much on the finer details of the game (for the sake of a general audience) and instead relies on expressions of the players to engage the viewer on the ebbs and flows of the game in progress. Madina Nalwanga, who plays the role of Phiona, pulls off the emotional scenes well. Her fellow slum champions are just as natural and pull off commendable supporting roles.

Nair has done well (with Disney’s support) to keep the setting as authentic as possible, shooting on location and casting several first-timers. Considerable air time is given towards portraying the harshness of poverty that’s so ubiquitous in Africa. The film’s pace slows down as a result. But the poverty remains central to the theme, because success in the sport doesn’t necessarily guarantee an early escape from the slums.

In spite of Phiona’s early victories, including a resounding victory for the Katwe troop in an all-Africa tournament in Sudan, she still returns to the squalor of her home and the soul-destroying routine of fetching water. Trophies and medals bring joy, albeit temporarily, but where are the cash incentives? Leave aside corporate backing. At one point she considers quitting the game, before it draws her back.

Phiona’s story is one of hope, that sport can be the path to escaping poverty in Africa, albeit with low expectations. The lack of encouragement and a general sense of insecurity, if combined, can drive the biggest talents away. Both threatened to push Phiona away from the game for good before her career even took off.

The federation chief’s reluctance to entertain slum kids in a tournament in an elite school because they “smelt bad” and would “spread diseases” is an example. Her mom’s reservations about chess being a White Man’s game is another, until she slowly warmed up to its potential for the family as a whole.

Without Katende’s persistence, though, there would’ve been no story. Just another talented kid living in filth, playing chess for fun, making boys cry.