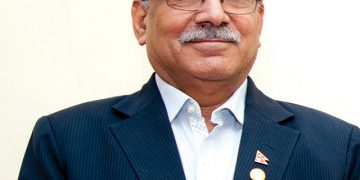 Kathmandu, August 2 (NIA): The Chairman of Communist Party of Nepal (Maoist-Centre), Pushpa Kamal Dahal , alias Prachanda, is all set to become Nepal’s new Prime Minister with the backing of the Nepali Congress (NC) and the Madesia parties representing the people of Indian origin.

After the CPN (Maoist-Centre) withdrew its support from the government of Prime Minister KP Sharma Oli, the latter resigned on July 24. He did so before a No-Confidence Motion was voted upon in Parliament, a vote he was likely to lose, Nepali Times said.

Dahal has played a deft kingmaker, carving out a political space for himself between the NC and the Communist Party of Nepal United Marxist Leninist (UML), and mending bridges with New Delhi. But Dahal’s time is limited, as he must step down in nine months to make way for the NC’s Sher Bahadur Deuba.

The Madhesi parties, representing the people or Indian origin living in the Terai region, have also extended their support to Dahal. Before registering his candidacy on Tuesday to be the new Prime Minister in Parliament, Dahal struck a three-point agreement with the Madhesi parties.

As per the deal, Madhesi parties will vote for Dahal in the House on Wednesday. And the new government – led by Dahal with support from the Nepali Congress (NC) – will declare all those killed during last year’s Madhes uprising as ‘martyrs’ and provide compensation for the injured.

The deal would also require the Maoists and the NC to push for constitutional amendments to address the 11-point demands of the Madhesi Front. Madhesi parties will not join the government immediately, but will becme part of it ‘once the deal is implemented, Nepali Times said.

According to the paper, the NC-Maoist coalition would not have required support from the Madhesi parties to form a new government. But they needed to bring them on board to justify why they toppled the UML government led by Prime Minister KP Oli.

Oli had become Prime Minister last year amidst an indefinite strike in the Tarai by Madhesi parties, which had rejected the constitution pushed through by the Big Three parties. He also did not show concern for the grievances of the Madhesi parties.

One of the reasons Dahal gave when he quit the ruling alliance was that Oli was not liberal enough to address the demands of Madhesi, Janajatis (tribal) and other minority groups. New Delhi, which is widely believed to have had a role in the change of government, also wants the new ruling coalition between Dahal and Deuba to bring Madhesis on board.

Following the lifting of the Indian blockade early this year, Madhesi parties restricted their agitation to a relay hunger strike in Kathmandu, but with little success in mounting pressure on the Big Three to rewrite the Charter. They saw the regime change as an opportunity to end their prolonged not too successful agitation.

With the UML sidelined, a constitutional amendment appears impossible. On Tuesday, the UML decided not to field a candidate for Prime Minister, but to vote against Dahal  and obstruct attempts to  amend the constitution.

The China’s Ambassador to Nepal, Wu Chuntai,  called on Dahal last Friday. Dahal promised to implement the agreements that the outgoing Prime Minister KP Oli had signed with his Chinese counterpart in Beijing early this year.

Oli’s resignation on Sunday had sparked speculation that the Nepal-China agreements – most importantly the Trade and Transit Treaty, that is expected to reduce the landlocked Himalayan nation’s dependence on India, will remain unimplemented.

Perceived to be backed by a New Delhi that wanted Oli’s ouster, Dahal has been trying hard to allay fears that the new government will not execute Nepal-China deals.

Oli had invited Chinese President Xi Jinping to Kathmandu, and the Nepali and Chinese Foreign Ministries had begun preparations for the high-level visit later this year. But the formation of the new ruling coalition between the Maoists and the NC, widely believed to have been engineered in New Delhi, has cast doubts over Xi’s visit. However, Dahal has claimed that Beijing is happier with him than with Oli.

Earlier on Monday, Nepalese President Bidya Devi Bhandari  had asked the political parties to elect a new Prime Minister by a majority vote, after the parties failed to meet the deadline to form a consensus government.

Bhandari had given a one-week deadline to elect a new Prime Minister, which ended on Sunday. But  the parties could not forge a consensus to form a new government within the stipulated time frame.

Parties will field their candidates for the post of Prime Minister on Tuesday and the election will be held on Wednesday.

The Nepali Congress (NC) President Deuba is not becoming PM just yet, but his party will get at least 13 cabinet berths, including the Home Ministry, in the new government. After nine months, Dahal will resign in favor of Deuba, who will be in power till the next parliamentary elections.

Deuba may have irked the Tharu community by refusing to give them a province in the far western Terai, but Madhesis support him because he unseated the unpopular Oli. If Deuba gets the Madhesis on board, his party will do well in the Tarai in the next elections. After being out of power for over a decade, Deuba is all set to become PM for the fourth time next year, Nepali Times says.