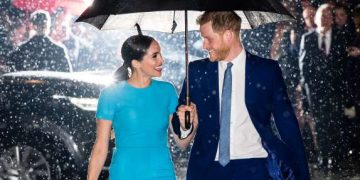 by Editor
in Around The World, Entertainment
Reading Time: 2min read
2 0 Prince Harry and Meghan, Duke and Duchess of Sussex, arrive at the Endeavour Fund Awards in London, England, on March 5, 2020.

On Wednesday, the Duke and Duchess of Sussex said their new endeavour would be focused on “creating content that informs but also gives hope”.

“Our lives, both independent of each other, and as a couple have allowed us to understand the power of the human spirit: of courage, resilience, and the need for connection,” the couple said in a statement, according to Variety. “Through our work with diverse communities and their environments, to shining a light on people and causes around the world, our focus will be on creating content that informs but also gives hope.

“As new parents, making inspirational family programming is also important to us, as is powerful storytelling through a truthful and relatable lens. We are pleased to work with Ted and the team at Netflix whose unprecedented reach will help us share impactful content that unlocks action.”

According to The New York Times, which first reported the news, although the couple may appear on camera, Meghan, who previously starred on the show Suits, has no plans to return to acting.

One of Meghan and Harry’s first projects will be an animated series focused on inspiring women, which is already in development, the outlet reports.

While the couple’s production company will operate independently from their charitable foundation Archewell, it will reportedly highlight similar issues and topics that are important to the duke and duchess.

In a statement, Ted Sarandos, Netflix’s co-chief executive and chief content officer, said the streaming service is “incredibly proud” that the royal couple chose Netflix as their “creative home”.

“We’re incredibly proud they have chosen Netflix as their creative home and are excited about telling stories with them that can help build resilience and increase understanding for audiences everywhere,” he said.

Prince Harry and Meghan, who relocated to California with their son Archie earlier this year, aren’t the first notable individuals to sign a deal with Netflix, as the company has previously worked with Michelle and Barack Obama and Shonda Rhimes on content partnerships.

The couple’s deal with the streaming service comes after Prince Harry recently appeared in the Netflix documentary Rising Phoenix, which features Paralympians from around the world and “tells the extraordinary story of the Paralympic Games.”

All of the content from the duke and duchess’s new multi-year deal will be exclusive to Netflix. According to The Times, it is not currently clear how much Netflix has agreed to pay the couple, who announced in January their intentions to step back from their roles as senior members of the royal family and seek financial independence.