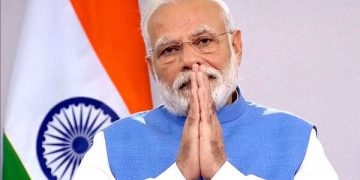 New Delhi May 13: At INR 20 lakh crore ($265.7 billion), the astonishingly expensive relief package and a half is India’s mathematical solution to fight the mindless microscopic organism called the coronavirus and its uniquely evil ways of destroying both human and economic well being.

“The economic package will focus on land, labour, liquidity and law. It will help small business, migrants, farmers,” Modi said in a televised address to the nation.

The Atma Nirbhar Bharat Abhiyan proposal translates to roughly 10 per cent of the GDP, which is pretty much in line with our ASEAN and Western peers.

SGX Nifty, happy beyond the power of speech, shot up more than 4 per cent within minutes after the announcement.

While the headline number appears bold and ambitious, it’s pertinent to note that the package is inclusive of the RBI measures announced last month.

If you recall  India has already announced nearly Rs 6 lakh crore (US$ 79.7 billion) on fiscal and monetary relief (Rs 1.7 lakh crore fiscal stimulus, Rs 3.74 lakh crore package first announced by RBI, and lastly the Rs 50,000 crore liquidity support to mutual fund houses and others). This translates to roughly 3.4 per cent of the GDP.

It means Tuesday’s announcement on a standalone basis could be over 6 per cent of the GDP or Rs 14 lakh crore.

The crucial details of the package are still hazy and the Finance Minister Nirmala Sitharaman is expected to announce it in the days to come.

Given that the first fiscal stimulus, which was a lite-version of the final relief package, was aimed largely at low-income households, expectations are high that the industry will get a lift-up in this round.

Taking a subtle jibe at China and its dominance in global trade, Modi also stressed the need for promoting local businesses and products and it was necessary for India to become an important part of the global supply chain.

Meanwhile, Tuesday’s relief package which hopes to resurrect MSMEs and ailing sectors such as hospitality and aviation will alter the economic grammar for good or worse.

It also means, the government’s slavish devotion to reduce fiscal deficit to 3 per cent of the GDP stands junked for a good time.

Perhaps, India will now have to pursue fiscal consolidation by fiscal expansion, which could irk credit rating agencies threatening to reduce India’s sovereign rating to junk.

By way of a teaser of what’s coming our way, the government last week raised its borrowing limits liberally by over 50 per cent to Rs 12 lakh crore. That’s because solving the problem within the existing fiscal limitations is nearly impossible.