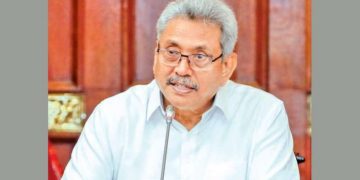 President Gotabaya Rajapaksa yesterday decided to remove the 14% income tax imposed on the profit earned by the gem and jewellery manufacturers and the 15% tax on gold imports. Colombo, September 8 (Daily News) – President Gotabaya Rajapaksa yesterday decided to remove the 14% income tax imposed on the profit earned by the gem and jewellery manufacturers and the 15% tax on gold imports.

The income tax concession given to the gem and jewellery industry since 1971 was done away with under the income tax policy introduced in 2017.

This created a situation where the actual income earned from the export of gem and jewelry could not be disclosed. In 2018, a 15% tax was imposed on gold imports. This has resulted in jewellery prices going up.

The President pointed out the necessity of removing relevant taxes immediately in order to take steps to uplift the gem and jewellery industry.

President Rajapaksa made these remarks during a meeting to discuss future activities of the State Ministry of Gem and Jewellery related Industries held at the Presidential Secretariat yesterday.

The 14 proposals put forward by State Minister Lohan Ratwatte to resolve the issues pertaining to Sri Lanka’s inability to become the global hub for gems were discussed in length.

Minister Ratwatte highlighted the importance of facilitating the importation of high priced gems unique to other countries and are not found in Sri Lanka and maintaining a gem reserve.

President Rajapaksa said that all relevant institutions should be brought into one place to avoid delays in the issuance of gem mining licenses.

The President instructed the State-owned banks to provide a loan of Rs. 1 million at a concessionary interest rate of 4%, to jewellery manufacturers and traditional jewellers to purchase gold. It was also decided to remove the barriers that have obstructed the release of uncultivated lands with gem deposits belonging to plantation companies and to take over control of these lands for the benefit of the mining industry.

President Rajapaksa instructed the officials to expedite the construction work of the proposed Gem Trading Complex and Training Centre at Demuwawatha, Ratnapura.

The President was told that unregulated and illicit gem mining is taking place in areas containing rich gem deposits of the Ratnapura District on a large scale. President Rajapaksa urged officials to immediately halt the gem mining activities that are carried out in a harmful manner to the environment as well as to remove barriers to the traditional gem mining industry. A number of views presented for the advancement of the industry were discussed in detail at this meeting, including the development of the Gem Laboratory of the National Gem & Jewellery Authority on par with international standards. Minister Wimal Weerawansa, State Minister Lohan Ratwatte, Head of the Presidential Task Force on Economic Revival Basil Rajapaksa, Secretary to the President Dr. P. B. Jayasundera and officials of the Line Ministries and gem and jewellery industrialists participated in this meeting.