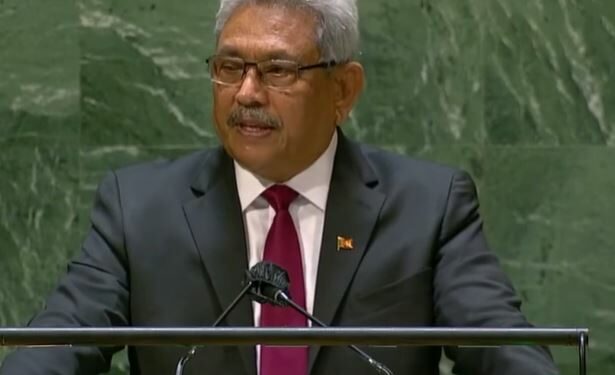 Colombo, September 23 (Counterpoint): In his maiden speech at the UN General Assembly on Wednesday, Sri Lankan President Gotabaya Rajapaksa portrayed Sri Lanka as a contributor to welfare beyond its shores when he announced his decision to set up a Regional Hub for Knowledge on COVID-19.

“In collaboration with the WHO, Sri Lanka is establishing a Regional Knowledge Hub to facilitate exchange of lessons learnt from COVID 19 and support countries to recover back better,” the President said. The knowledge hub will come up in Colombo.

“COVID19 pandemic has had a devastating impact on humanity. I sympathize deeply with all who have lost their loved ones during the pandemic. I thank frontline healthcare and essential workers around the world for their dedication, and commend the World Health Organization for its crisis response. I also greatly appreciate the rapid advances made by the scientific and medical communities in devising vaccines and treatment protocols to combat the virus,” the President said.

He then drew attention to the challenges surrounding the production, distribution, deployment and acceptance of vaccines and the need to   overcome these urgently if the spread of dangerous new virus strains is to be prevented. “Ensuring that everyone, everywhere, is vaccinated is the best way out of the pandemic,” the President stressed.

Indeed, Gotabaya Rajapaksa has been consistently telling Sri Lankans that the answer to the devastating pandemic is not a perpetual lockdown but rapid vaccination. Many times he has drawn attention to the fact that more than 90% of the fatalities in Sri Lanka had been among the unvaccinated.

In his speech at UNGA, the President rightly highlighted Sri Lanka’s “very successful” vaccination program. On September 18, WHO formally acknowledged Sri Lanka’s achievement of vaccinating 50% of its population fully (with two doses).

“President Rajapaksa’s ambitious vaccination effort, that spearheads Sri Lanka’s COVID-19 response, has long surpassed WHO’s targets.  It is also likely to surpass its own target of vaccinating 60% of the population by 31 December 2021,” WHO said in a statement.

WHO further said that at the center of this success is Sri Lanka’s strong primary health care foundation.  “This has been adapted quickly for COVID-19 vaccine readiness in a whole of government and whole of society approach. Vaccine deployment was initiated with coverage of frontline workers and then expanded progressively to all over 60 and, now, over 30 years of age.”

“Further, given vaccine supplies, the expansion of coverage was managed strategically starting with the high risk geographical area of the Western province and subsequent roll-out to other regions,” WHO said.

President Rajapaksa fully acknowledged the help Sri Lanka received from the international community. “Sri Lanka benefitted greatly from financial and material support provided by bilateral and multilateral donors to manage the pandemic. I thank these nations and institutions for their generosity. The increased global cooperation visible during this ongoing crisis is greatly encouraging,” he said.

However, there is still more to be done, he cautioned. “The economic impact of the pandemic has been especially severe on developing countries. This has placed the implementation of the 2030 Agenda for Sustainable Development Goals at considerable risk. It is vital that more initiatives including development financing and debt relief be adopted through international mechanisms to support developing nations and help them emerge from this uncertain situation,” he said.

On the economic woes of Sri Lanka, he said: “The lockdowns, together with general movement restrictions, reduced international travel and slower global growth have affected nearly all sectors of our economy. Tourism, one of Sri Lanka’s highest foreign exchange earners and a sector that supports nearly 14% of the population, has been devastated.”

The President said that the government has been helping the tourism and small scale industrial sector to stand on their feet again through interest moratoriums and other financial interventions. Daily wage earners and low-income groups were supported through grants of cash and dry rations during lockdowns, adding significantly to state expenditure.

But the economic repercussions of the pandemic had limited the fiscal space available to implement development projects, the Lankan President said and sought “debt relief” from the international community.

Touching on the issue of climate change and sustainable development, President Gotabaya Rajapaksa said that by the adoption of the Colombo Declaration on Sustainable Nitrogen Management, which seeks to halve nitrogen waste by 2030, Sri Lanka is making efforts to reduce environmental pollution.

“Sustainability is a cornerstone of Sri Lanka’s national policy framework. Because of its impact on soil fertility, biodiversity, waterways and health, my government completely banned the use of chemical fertilizers, pesticides, and weedicides earlier this year. Production and adoption of organic fertilizer, as well as investments in organic agriculture, are being incentivized,” the President said.

On other aspects of conservation, the President said that his government aims at increasing forest cover significantly in the coming decades. “We are also working to clean and restore over 100 rivers countrywide, and to combat river and maritime pollution. We have  banned single use plastics to support ecological conservation.”

Sri Lanka recognizes the urgent need to reduce use of fossil fuels and support de-carbonization, the President said. “Our energy policy seeks to increase the contribution of renewable sources such as solar, wind and hydropower to 70% of our national energy needs by 2030.”

Turning to investment and growth in Sri Lanka, the President said that his country intends to make “full use of geostrategic location and our robust institutions, strong social infrastructure, and skilled workforce, to attract investment and broaden trade relationships.”

Sri Lanka is focusing on extensive legal, regulatory, administrative and educational reforms to facilitate this, and to deliver prosperity to all our people, he added.

On the ethnic and religious issues Sri Lanka’s is facing, President Rajapaksa said that in 2019, Sri Lanka experienced devastation wrought by extremist religious terrorists on Easter Sunday. Before that, until 2009, it had suffered from a separatist terrorist war for 30 years. “Terrorism is a global challenge that requires international cooperation, especially on matters such as intelligence sharing, if it is to be overcome,” he said.

“Violence robbed Sri Lanka of thousands of lives and decades of prosperity in the past half century. My government is committed to ensuring that such violence never takes place in Sri Lanka again. We are therefore acting to address the core issues behind it,” the President assured.

“Fostering greater accountability, restorative justice, and meaningful reconciliation through domestic institutions is essential to achieve lasting peace. So too is ensuring more equitable participation in the fruits of economic development. It is my government’s firm intention to build a prosperous, stable and secure future for all Sri Lankans, regardless of ethnicity, religion, or gender,” the President said.

To achieve these goals, he said his government is ready to engage with all domestic stakeholders and to obtain the support of international partners and the United Nations, in this process, he said.

However, the process and solution should be homegrown, and not imposed from outside through fiats, the President stressed. “History has shown that lasting results can only be achieved through home-grown institutions reflecting the aspirations of the people. Sri Lanka’s Parliament, Judiciary and its range of independent statutory bodies should have unrestricted scope to exercise their functions and responsibilities,” he insisted.

In this the UN has a role to play, the Lankan President said. “It is the role of the United Nations to facilitate this by treating all sovereign states, irrespective of size or strength, equitably, and with due respect for their institutions and their heritage.”

As the leader of a majority-Buddhist country, the Sri Lankan President requested the United Nations and the international community to ensure the protection of the Buddhist heritage of Afghanistan (now under the rule of the Islamic extremist Taliban). When the Taliban were last in power, they had destroyed the statues of the Buddha in Bamiyan with artillery fire.