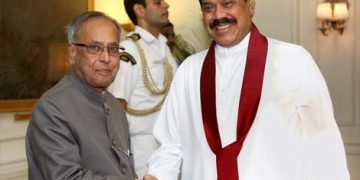 In his book “Choices: Inside the making of India’s foreign policy”, India’s former National Security Advisor and Foreign Secretary Shivshankar Menon recalls Foreign Minister Mukherjee's contribution to the execution of India's policy at that critical time. Colombo, September 2: The former Indian President and External Affairs Minister, Pranab Mukherjee, who died on August 31 aged 84, had played a critical role in the last stages of Sri Lanka’s war against the Liberation Tigers of Tamil Eelam (LTTE). He had also played a role in Bangladesh politics in the immediate aftermath of the assassination of Sheikh Mujibur Rahman in Bangladesh.

Mukherjee was the first top Indian politician to openly seek diplomatic recognition and material help for the “sovereign” Bangladesh government-in-exile in Mujibnagar. “There are many instances in world history when intervention on similar lines had taken place,” he told the Indian parliament on June 15, 1971. Recognition came soon after. The then Indian Prime Minister Mrs. Indira Gandhi appreciated his efforts to convince foreign opinion-makers of the justice in India’s stand on the Bengali movement in East Pakistan and get their support for the Bangladesh movement.

When Sheikh Mujib’s daughter (now Bangladesh Prime Minister) Sheikh Hasina and her husband Wazed took refuge in New Delhi after Mujib and the rest of the family were massacred in a military coup on August 15, 1975, Mukherjee and his wife Suvra looked after Hasina for five years. Bangladesh has ordered State mourning in gratitude.

However, Mukherjee’s contribution to the defeat of the LTTE is not known outside a close circle.

In his book “Choices: Inside the making of India’s foreign policy”, India’s former National Security Advisor and Foreign Secretary Shivshankar Menon recalls that New Delhi had a very delicate problem on hand in 2009 when the Sri Lankan army had surrounded the LTTE in a small area and was about to launch its final offensive. The plan evoked the  possibility of a slaughter of thousands of Tamil civilians.  While New Delhi fully backed the idea of militarily defeating the LTTE, it was worried that the slaughter of Tamils civilians will adversely affect the prospect of its ally, the Dravida Munnetra Kazahagam (DMK), in the May 2009 parliamentary elections.

For Indian policy makers, the priority was clear: to ensure that the least harm fell to the civilian population trapped in the midst of war, whatever their ethnicity – Tamil, Sinhala or Muslim. This was a moral as well as a political imperative. The Indian General Elections were coming up in May 2009 and Tamil Nadu, the state that had swung the balance in the 2004 election in favor of the Congress-led United Progressive Alliance had to win the polls. The issue was a very sensitive one in Tamil Nadu because “for every Tamil in Sri Lanka, there were about 27 Tamils in India who were emotionally affected by and invested in what happened to Tamils in Sri Lanka,” as Menon put it.

Here are the relevant excerpts from Menon’s book:

“The Indian government therefore was in intense and constant touch with the Sri Lankans and President Rajapaksa, using a troika arrangement consisting of National Security Advisor M.K.Narayanan, Defense Secretary Vijay Singh and myself as Foreign Secretary, on our side and Defense Secretary Gotabaya Rajapaksa, Secretary to the President Lalith Weeratunga, and the president’s political right hand, Basil Rajapaksa, on the Sri Lankan side. Both Basil and Gotabaya were President Mahinda Rajapaksa’s brothers, which made decision making easy and quick, but the decisions, once made, were also final and hard to change.”

“India’s external affairs minister, Pranab Mukherjee, took a personal interest and was actively involved throughout, as was Prime Minister Manmohan Singh. I vividly remember the  atmosphere of crisis  that built up during that period and the repeated visits to and from Colombo in the first five months of 2009. Particularly memorable were midnight visits to Colombo with Pranab Mukherjee when he flew into Colombo at 8 pm, and went straight to the President’s Palace for a military briefing by Fonseka and a political one by President Rajapaksa and had a long conversation exploring options until we left the palace after midnight to fly home on the Indian Air Force’s Embraer jet.”

“In those conversations with the Sri Lankans, we concentrated on attempting to save civilians. To prevent attacks on civilians, we asked that there be  safe corridors for them to exit the fighting zone, that an amnesty policy be announced and enforced visibly, that fighter jets not be used in the conflict to strafe the LTTE positions surrounded by civilians (as most of them were deliberately located by the LTTE) and so on.”

“To their credit, while the Rajapaksas negotiated hard, to avoid limitations to their ability to wage war against their mortal enemy, they did agree to allow safe passage corridors and to create safe zones in January and February. Later in March, they also agreed not to use heavy caliber weapons when the LTTE had trapped a large number of civilians  with them in a tiny area along the coast in the final stages of the war. More significantly, the Rajapaksas implemented these commitments in practice.”

“One thing they would not agree to, however, was any understanding on keeping the LTTE leaders alive and taking them prisoner for the purpose of putting them on trial. Nor were they willing to see any form of international mediation or a ceasefire that would enable the top LTTE leadership to survive to fight another day. There were also obvious limits to what India could press for in terms of treatment of the convicted killers of Prime Minister Rajiv Gandhi, some of whom were still wanted by the law in India.”

“Om January 21, 2009, the SLA (Sri Lankan Army) declared a 32-sq km safe zone between the A35 highway and the Chalai Lagoon where they said  there would be no firing. However, only a trickle of civilians were able to enter the zone. The LTTE prevented them, and the no-firing commitment had been broken when the SLA suspected the LTTE of entering the zone. Instead, the civilians fled and were pushed into a narrow strip between Nanthikadal and the Indian Ocean. On February 12, 2009 the SLA declared a new safe zone, 10 sq. km northwest of Mullaitivu, but Sri Lankan Air Force attacks in the zone continued.”

“At the same time, Norway and the United States were attempting to secure a ceasefire, to negotiate exile for Prabhakaran and to explore other exit strategies that would effectively keep the LTTE alive and to fight another day, politically or militarily. For politicians and leaders in India, whether in Tamil Nadu or in Delhi, this was not an acceptable stance or outcome. Political leaders across the political divide in Tamilnadu knew that the only way Prabhakaran could lead Tamil Eelam would be to physically eliminate the real leaders of the Tamils who were in India, just as he had done to other Tamil leaders in Sri Lanka. Despite differences in public posture on the issue in Tamilnadu and Delhi, there was cross-party private understanding on the basics of policy toward Sri Lanka with both the Dravida Munnetra Kazhagam (DMK) and the All India Anna Dravida Munnetra Kazhagam (AIADMK) party as a result of considerable hard work by Pranab Mukherjee and Narayanan, as I found when I met alone with very senior Tamilndu politicians  in Chennai, away from the glare of publicity. Ironically by murdering Rajiv Gandhi, the LTTE  had caused a shift in broader  Indian attitudes, which came to be more in line with those of the Sri Lankan government.”

Newsin.asia adds: When President Gotabaya was Defense Secretary during Eelam War IV he had said many times publicly that the war against the LTTE was won very substantially due to policy coordination with India which was carried out through the “Troika” system.

“If any country could have stopped the war at the time, it was India,” Gotabaya would say. India helped by keeping Tamil Nadu under control throughout the critical last phase of the war.