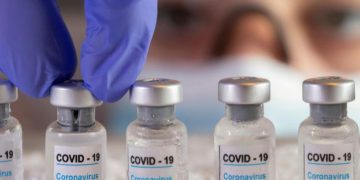 Nine out of 10 people in dozens of poor nations could miss out on getting vaccinated against coronavirus next year.

by Editor
in Around The World, Coronavirus, Health, World
Reading Time: 3 mins read
3 0 December 9 (Al Jazeera) – A new report has found that as many as 90 percent of the population in dozens of poorer countries will miss out on the coronavirus vaccine next year because most of the supply has already been taken by rich nations.

That leaves at least 67 poor countries with only enough to vaccinate one out of 10 people, unless governments and the pharmaceutical industry take urgent action, the alliance, which includes Amnesty International and Oxfam, warned.

Five of the 67 – Kenya, Myanmar, Nigeria, Pakistan and Ukraine – have reported nearly 1.5 million coronavirus cases between them.

In contrast, rich nations and economies that are home to 14 percent of the global population had bought 53 percent of the total stock of the most-promising vaccines as of last month.

“The hoarding of vaccines actively undermines global efforts to ensure that everyone, everywhere can be protected from COVID-19,” said Steve Cockburn, Amnesty International’s head of economic and social justice.

“Rich countries have clear human rights obligations not only to refrain from actions that could harm access to vaccines elsewhere but also to cooperate and provide assistance to countries that need it.”

According to Oxfam, Canada has bought enough doses to vaccinate its population five times over.

South Korea, another leading world economy, has bought sufficient vaccine for 88 percent of its population of more than 50 million people.

Meanwhile, the Philippines, considered a developing country, has so far secured only 2.6 million doses for delivery next year. That only covers 1.3 million people out of its total population of more than 100 million.

“No one should be blocked from getting a life-saving vaccine because of the country they live in, or the amount of money in their pocket,” Anna Marriott, Oxfam’s health policy chief, said.

“But unless something changes dramatically, billions of people around the world will not receive a safe and effective vaccine for COVID-19 for years to come.”

The United Kingdom started rolling out its vaccine on Tuesday, becoming the first country in the world to administer the much-anticipated inoculation against a disease that has already infections millions of people around the world and killed about two million others.

The alliance analysed data, including contracts reached between countries and pharmaceutical companies, in coming up with their conclusion and recommendations, the report said.

Among the three vaccines for which efficacy results have been announced, almost all the available doses of two of them – Moderna and Pfizer-BioNTech – have already been acquired by rich countries, the Alliance noted. The Food and Drug Administration (FDA) in the United States is discussing emergency use authorisation for the Pfizer-BioNTech vaccine this month.

Dr Mohga Kamal Yanni, from The People’s Vaccine Alliance, noted that in the current system, pharmaceutical companies are using public funding for research, but retaining exclusive rights to the technology developed.

While that boost profits for the companies, the system “could cost many lives,” he warned.

Dr Sidney Wong, Executive Co-Director of Doctors Without Borders’ Access Campaing (Medecins Sans Frontieres or MSF) has urged pharmaceutical companies such as Pfizer and Moderna to scale up production of the vaccine doses.

“What we really want to see is a rapid expansion of the overall global supply, so there are more vaccines to go around and doses can be allocated according to WHO’s (World Health Organization) public health criteria, not a country’s ability to pay.”

MSF says companies need to share intellectual property (IP), technologies, data and know-how, so that the vaccines can be produced as widely as possible, and priced affordably. It noted that Moderna was the only firm so far that had promised not to enforce its patents during the pandemic, but unlike AstraZeneca, however, it has not committed to selling the vaccine at “no profit”.

“By withholding critical information like the costs of R&D, clinical trials, and manufacture, governments and pharmaceutical corporations are shirking their responsibilities to the taxpayers and public entities who funded the development of these vaccines and will pay for them,” said Dana Gill, US Policy Advisor for MSF’s Access Campaign.

“Without transparency, the public cannot assess fair pricing and governments cannot negotiate lower prices based on true costs. No company should be allowed to profiteer off the back of this pandemic.”