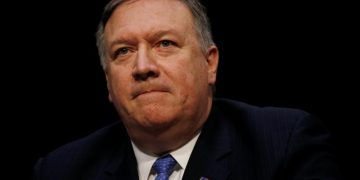 Colombo, October 30: Less than a week ahead of the November 3 US Presidential election, the US Secretary of State, Mike Pompeo, was on a whirlwind tour of India, Sri Lanka, Maldives, Indonesia and Vietnam, trying his hardest to rope in these countries into a US-led anti-China alliance.

The urgency shown by Pompeo to undertake this arduous trip, days before polling in an election fraught with uncertainties, had become subject to much speculation. Was the Secretary of State’s peregrination part of Trump’s grand-standing on China to get the nationalistic vote at home, or was it to make Trump’s anti-China policy irreversible even if the moderate Joe Biden comes to power? Perhaps it could be a bit of both.

A Trump win cannot be ruled out, though most pre-election opinion polls say that Trump will lose. A pre-poll survey often does not take into account certain socio-psychological factors and also the possibility of a last minute change of mind at the polling booth. Pollster Robert Cahaly, head of the Georgia-based Trafalgar Group, says that there is hidden support from voters who are too embarrassed to admit they will vote for Donald Trump.

According to Cahaly, Trump will be narrowly reelected on November 3. Cahaly owes his credibility to the fact that he correctly predicted Trump’s victory in 2016 when everybody else predicted a Hillary Clinton win. Cahaly takes into account the social pressure that leads many people to hide their support of a controversial, polarizing candidate like Trump, even from anonymous pollsters.

Be that as it may, Trump and his team members, like Pompeo, believe that, whether he wins or not, his anti-China policy will have to be made an indelible part of American foreign policy for the security and prosperity of the US and the “free world”.   While the anti-China line may be a good for winning the election, it will be vital for America’s survival as a super power.

Why Is Trump Emphatic On China

Trump’s anti-China policy, of which Pompeo has been the most aggressive and outspoken exponent, is part of Trump’s most potent election platform – the ‘America First’ brand of US nationalism. The Trump Administration has banned Chinese apps WeChat and Tiktok on security grounds. It has campaigned against Huawei’s 5G technology, and had put in its Entity List, 24 Chinese companies including subsidiaries of the behemoth China Communications Construction Company (CCCC), for alleged lack of transparency.

“We see, from bad deals, violations of sovereignty, and lawlessness on the land and sea, that the China Communist Party, as a predator. And the US comes in a different way. We come as a friend and as a partner,” Pompo said in Colombo.  He harped on the alleged villainy of the Chinese Communist Party in Tokyo and New Delhi earlier. In Colombo, he even sidelined the US’ pet project, the US$ 480 million Millennium Cooperation Challenge Corporation Compact (MCC), and went full blast at China. His deputy, Dean Thompson, openly demanded in a press conference in Washington, that Sri Lanka had better choose between dictatorial and imperialist China and the democratic free world led by the US.

How Successful Has The Tour Been?

Looking into the achievements of Pompeo’s unusually long and arduous tour, one could say that the result has been a mixed bag. During his sojourn in New Delhi, the US and India signed the landmark  Basic Exchange and Cooperation Agreement (BECA) , which allows India and the US to share military information which includes maps, nautical and aeronautical charts, commercial and other unclassified imagery, geodetic, geophysical, geo-magnetic and gravity data. This will help India face an aggressive and technologically advanced Chinese army in the 4000 km Himalayan border.

However, while the Indians were glad to have this facility, they did not participate in Pompeo’s China bashing. In fact, neither Foreign Minister S.Jaishankar nor Defense Minister Rajnath Singh even mentioned China in the joint press conference. Rajanath  Singh dodged a question on India’s bid to buy S-400 missile system from Russia in the face of a US threat of sanctions. India was obsessed with Pakistan and the “cross-border terrorism” that the latter is said to practice. While Pompeo endorsed Indo-US cooperation in fighting Pakistan-based terrorists, it was clearly not an over-riding issue for him. China was the over-riding issue.

Observers attribute the India’s reserve to it’s oft-declared desire for “strategic autonomy” alongside “strategic partnership”. The US has consistently found this to be an irritant. Clearly, with border talks going on with China, India hopes that it can make a deal with China and feels that too close a relationship with the US will be detrimental to it.

Pompeo’s next port of call was Colombo. But here, his anti-China rhetoric fell on deaf ears at his meetings with President Gotabaya Rajapaksa and Foreign Minister Dinesh Gunawardena. In fact he had to put up with President Gotabaya’s assertion that he is not ready to make his island nation a theater of Sino-US conflict. He said that he will not compromise Lanka’s sovereignty in conducting foreign relations. He asserted that China has not put Sri Lanka in a “debt trap” as alleged and that China has massively invested in his country in infrastructure projects.

Gotabaya strongly urged the US to invest in Sri Lanka. Pompeo was left with no option but to say that the US will invest in Lanka especially in the tourism sector.  Foreign Minister Gunawardena listed many areas like ICT and agriculture, where Lanka would like US investment. The two countries agreed to take concrete steps towards this end. However, the never-say-die Pompeo used the press conference and interview with the State TV Rupavahini to abuse China to his heart’s content.

At the next stop, Male in the Maldives, Pompeo had little to do because President Ibrahim Solih is as pro-West as any regime can get. The earlier Abdullah Yameen regime was explicitly pro-China and had borrowed heavily from it for infrastructure development. It is said to have become a victim of a Chinese debt trap. The Yameen regime was voted out in 2018 for corruption and authoritarianism.

While in Male, Pompeo announced that the US would set up a full-fledged embassy in Male and de-link it from the US embassy in Colombo. Since maritime analysts describe the Maldives as a “toll gate” between the western Indian Ocean chokepoints of the Gulf of Aden and the Strait of Hormuz on one side, and the eastern Indian Ocean chokepoint of the Strait of Malacca on the other, the US has been keen on having a defense pact with it. A pact was signed in September this year called a Framework Agreement. Ambassador Alaina Teplitz told the Nikkei Asian Review that the pact would pave the way for the Maldives “to join other nations with a shared responsibility to uphold the rules and values ensuring a free and open Indo-Pacific.” The Maldivian Defense Forces and a US Special Operations Group have already held joint exercises.

Bid To Rope In Indonesia

The US is keen on getting Indonesia on board it’s China encirclement strategy. Indonesian Defense Minister Prabowo Subianto visited Washington recently. But the limiting factor is that China is Indonesia’s most important trading partner. And the Trump Administration has annoyed Indonesians by removing Indonesia from the Special Differential Treatment (SDT) list available under the WTO Agreement on Subsidies and Countervailing Measures. This step adversely affected Indonesia’s exports to the US. Indonesia has some fishing rights issues with China, but if it has to help the US keep the Malacca Straits free from Chinese intrusions, it has to get some economic concessions from Washington on the trade front.

Pompeo was in Vietnam for the 25 th.annivesary of the establishment of diplomatic relations. Vietnam shares with the US a fear of China, but it also has some economic issues with the US also.  The US has removed Vietnam from Special Differential Treatment (SDT) list. The US accuses Vietnam of downgrading its currency to boost exports to the US. But Vietnam dispute this. Vietnam, like Indonesia and Sri Lanka, also detests America’s meddling in its internal affairs by taking up human right issues.