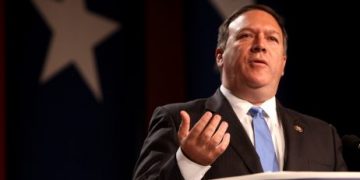 The U.S. secretary of state’s Europe and Middle East tour comes amid baseless insinuations about the November 3 election made by Trump – and Pompeo himself.

by Editor
in Around The World, United States, World
Reading Time: 3min read
1 0 November 13 (The Diplomat) – U.S. Secretary of State Mike Pompeo will embark on yet another trip, just 10 days after a U.S. presidential election that saw the defeat of his boss President Donald Trump.

During his November 13-23 trip, Pompeo will visit France, Turkey, and Georgia in Europe, and Israel, the United Arab Emirates, Qatar, and Saudi Arabia in the Middle East.

While his trip agenda, according to a State Department statement, focuses on security issues, curiously Pompeo’s trip to Turkey will see him meet the head of the Eastern Orthodox Church in order “to promote our strong stance on religious freedom around the world.”

Earlier this week, Pompeo raised eyebrows across the world when he – apparently by way of a joke – claimed that “there will be a smooth transition to a second Trump administration.”

Commentators across the world noted this to be a deeply irresponsible remark, coming as it does at a time when Trump is showing no outward signs that he has conceded defeat in the November 3 election. Instead, Trump continues to falsely insist that he has been victim of electoral fraud.

Commenting on Pompeo’s remarks – which are tantamount to supporting Trump’s odd claims – the chairman of the House Foreign Affairs Committee, Elliot Engels of the Democratic Party, noted, “Secretary Pompeo shouldn’t play along with baseless and dangerous attacks on the legitimacy of last week’s election,” adding “The State Department should now begin preparing for President-elect Biden’s transition.”

What added a troubling dimension to Pompeo’s remarks was Trump’s decision to unceremoniously fire Secretary of Defense Mark Esper on Monday, beginning what looks like a purge of the U.S. national security establishment.

In addition to Esper, the Trump administration has asked Undersecretary of Defense for Policy John Anderson, Undersecretary of Defense for Intelligence Joseph Kernan, and Pentagon Chief of Staff Jen Stewart to step down and replaced them with Trump loyalists. As the Washington Post’s Josh Rogin wrote of the replacements, “Many officials in the agencies they are taking over are also now wondering whether the loyalists’ plan includes helping Trump resist leaving office.”

There is of course a less alarming explanation for both Pompeo’s diplomatic hyperactivity as well as the Pentagon firings: The Trump administration wants to signal to its base that it is firmly in control, and it’s business as usual when it comes to foreign policy and national security, with the added intended effect of suggesting that the lame-duck period between now and January 20 is, in fact, not so.

However, it is unclear why French President Emanuel Macron – whom Pompeo is scheduled to meet during his Paris visit – and others will take him seriously under the current circumstances. But perhaps that does not matter much for an administration that has had difficulty in accurately gauging how the world views the United States under Trump’s leadership in the past.

Already, Pompeo’s tone-deafness was in full sight during his Asia visits last month when most of the countries he visited – except for India and the Maldives – did not find much joy in his excoriation of the Chinese Communist Party. Southeast Asian leaders, in particular, have found Trump – and Pompeo’s – engagement with their region unsteady, as it oscillated between diplomatic hectoring and aloofness.

That said, Pompeo will perhaps find his hosts in the Middle East – including Benjamin Netanyahu, Mohammed bin Zayd, and Mohammed bin Salman – more receptive. The Trump administration on November 10 announced its decision to sell weapons worth more than $23.37 billion to the United Arab Emirates, including 50 F-35 Lightning II aircraft and 18 MQ-9B drones.