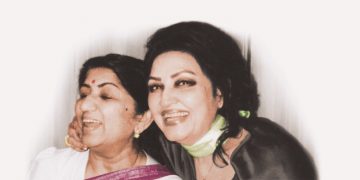 Playback singing, a unique feature of Indian films, originated in 1935 and has stayed

Playback singing, a unique feature of Indian films, originated in 1935 and has stayed

But it was the death of K.L.Saigal, the migration of Noorjahan to Pakistan in 1947 and the advent of Lata Mangeshkar and Mohammad Rafi as playback singers which truly established playback singing in Indian cinema It’s the theme music, the background score, the soundtrack of our lives. The Hindi film song has been part of our existence, seemingly forever. But you can actually put a date to it: 85 years ago, in 1935, the first playback song was recorded, for Nitin Bose’s Dhoop Chhaon, by music directors RC Boral and Pankaj Mullick.

Before that, actors sang their own songs, on set, and the musicians played on set too — often hidden behind trees and other props! But not every star could sing, and in his book, Behind the Curtain: Making Music in Mumbai’s Film Studios, Auckland University professor of ethnomusicology Gregory D Booth quotes a letter written in 1940 to a film magazine, urging Ashok Kumar to please “stop singing in pictures”.

Playback singing took time to settle in, but 1947 was something of a turning point. India’s most famous singing star KL Saigal died early that year, and the reigning female singing star Noorjehan went to the newly carved-out Pakistan, leaving behind a huge void. That void was filled by two singers who went on to become playback legends: Lata Mangeshkar and Mohammed Rafi.

But it would be another two years before playback singers acquired independent fame and fandom. Things changed with Mahal in 1949. Lata was not mentioned on the music record as the singer of Aayega Aanewala; the film’s standout song was credited instead to Kamini, the character played by Madhubala. Fans clamored for the name of the actual singer, writing scores of letters to All India Radio. Lata lobbied too. The ‘mistake’ was rectified in the next batch of records, American music professor Jayson Beaster-Jones says in his 2015 book, Bollywood Sounds, quoting film scholar Rachel Dwyer.

Thereafter, crediting playback singers became the norm. Beaster-Jones says the appearance of playback singers’ names on recordings was in fact “the pivotal point when playback singing was fully accepted by Indian audiences”.

The foundations of playback singing were laid in these years; the late ’40s and early ’50s would birth what is generally regarded as the Golden Age of Hindi film music. Shankar Iyer, a musicologist from Team Rewind, a group of corporate professionals who attempt to showcase films songs as an art form, agrees that the ’50s were a ‘defining decade’. But he adds, “The overall song composition evolved over the next two decades, as singers got more mature in their styles but also thanks to the lovely orchestral arrangements that beautified the basic melody of songs.”

Alongside Lata and Rafi, other revered singers came into their own in these years: Mukesh, Talat Mahmood, Geeta Dutt. (Kishore Kumar and Asha Bhosle would find their own huge stardom later.) And the lyrics were by extraordinary poets like Shakeel Badayuni and Shailendra.

Playback singing meant songs were recorded in separate venues, usually in advance, and released before the film, in order to promote it — a practice that continues till today. Booth points out that playback technology, because it separated the production of the music from that of the films, gave the Hindi film song an independent existence (a reason often cited for the absence of a non-film music culture in India).

Professional recording spaces cropped up in Bombay and music composers and arrangers began creating what Iyer referred to earlier — the film orchestra, probably the grandest pillar of Hindi film music. Goans and Parsis (both of whom had a firm grounding in Western music, classical and popular) became the backbone of the film orchestra, even as practitioners of the sitar, tabla and other Indian musical instruments brought in their own expertise.

These were busy years for the musicians, as they hopped from recording to recording. Composers like Naushad, SD Burman, C Ramachandra and Shankar-Jaikishen set up their own orchestras, a system that would continue for decades, right till the onset of digital music in the 1990s. Classical, folk and Western sounds came together in a glorious mix, setting a pattern for years to

Perhaps it’s not a coincidence that in the early years of nation-building, playback singing led to the heart-warming scenario where everyone — singers, composers, lyricists, orchestra musicians, not to mention directors and actors — worked together, region and religion notwithstanding. If this calls for a song, what could be more appropriate than the 1955 Mukesh number in Shree 420: ‘Mera joota hai Japani / yeh patloon Inglistani / sir pe laal topi Rusi / phir bhi dil hai Hindustani.