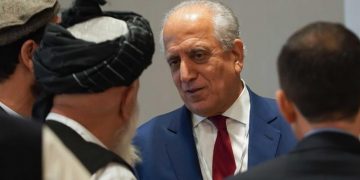 Pitfalls on the road to peace in Afghanistan

Pitfalls on the road to peace in Afghanistan Both the US and the Taliban are participating in the on-going series of talks in Doha (Qatar) in the hope of arriving at a ceasefire and a settlement which will enable: (1) the holding of intra-Afghan political negotiations  for sharing power (2) the withdrawal of US forces from the country by September 1.

Other counties like Russia, China and Pakistan are also involved in this endeavor. This is because of two reasons: Firstly, an unstable, violent and radicalized Afghanistan poses a threat to their own internal security. They fear that their Muslim populations will catch the contagion of Wahhabi radicalism and militancy from a troubled Afghanistan. Secondly, Russia and China are interested in ensuring Afghanistan’s economic integration with the region.

These countries would like to capitalize on Afghanistan’s geographical location at the crossroads of the Middle East, Central Asia, South Asia, and China. An Afghanistan beset by war cannot advance the Turkmenistan-Afghanistan-Pakistan-India (TAPI) pipeline project or China’s flagship Belt and Road Initiative (BRI) or projects to exploit the  trillion dollars’ worth of mineral deposits in Afghanistan.

U.S. President Donald Trump said on August 3 that there has been “a lot of progress” in peace talks with the Taliban. On August 2, the US Special Representative for Afghanistan, Zalmay Khalilzad, tweeted: “The Taliban are signaling they would like to conclude an agreement, and we are ready for a good agreement.”

For his part, Taliban spokesman Zabihullah Mujahid said there is “hope that a solution may get finalized in this round.”

But Mujahid added that some outstanding issues remain, without specifying the issues. The  Taliban spokesman had earlier said that the US would have to withdraw its troops first before talks with the West-backed Afghan regime could begin. This is indeed an issue. In this context it should be recalled that even US envoy Khalilzad had said that the US is aiming at an agreement on intra-Afghan talks on sharing power and not on a ceasefire per se.

Therefore, fundamental differences between the US and Afghanistan have not gone away despite talk of an agreement being reached by September.

A fact which must be taken into account is that the eight rounds of Doha talks have taking place in the midst of extreme violence, and in fact, an increase in violence in Afghanistan. The United Nations Assistance Mission in Afghanistan (UNAMA) has said that more than 1,500 civilians were killed or wounded in July. The UN said in a report released on July 30, that 1,366 civilians were killed between January 1 and June 30 this year. In February, the UN said civilian deaths reached a record high in 2018. It said that more than 32,000 civilians had, in total, been killed in the past ten years. Air strikes and ground operations by the Afghan government forces killed more civilians than the militant groups did.

In January, Afghan President Ashraf Ghani said that more that 45,000 members of the security forces had been killed since he became leader in late 2014. Indeed, the 18-year war in Afghanistan is currently the deadliest conflict in the world, causing more casualties than the fighting in Syria, Libya or Yemen.

President Trump is keen to end the war, partly because it  costs around US$ 45 billion annually. Trump is serious about withdrawing most of his 14,000 forces by September 1 so that he may enter the 2020 Presidential race saying that he has fulfilled an election promise. The US’ larger strategy has been to divert attention from tackling terrorism to great power competition with Russia and China.

The Taliban is interested in the talks to utilize the sudden and unexpected opportunity for capturing power by peaceful means which has been provided by the US decision to talk to it about a solution which will enable it to disengage from Afghanistan. The US, which has always fought to win, is suddenly talking about disengagement and withdrawal, giving the Taliban an opportunity to grab power in a way it never dreamt of.

But being on the winning side, the Taliban will fight for a comprehensive win. It wants the US to withdraw completely, not leaving any “contingency force” behind. It says that it is ready to negotiate with the “puppet” Afghan government in Kabul provided the US and its Western allies withdraw all their soldiers from Afghanistan.

Given the Taliban’s past behavior, it is very unlikely that, when left to itself and in military command in Afghanistan, it will  negotiate with the Kabul regime on anything other than abject surrender. It will immediately abolish the regime and take over the country fully.

It is pointed out that in the US, there is a division between the civilian and military leaderships over withdrawal. There is a similar division in the Taliban too. This is why the Taliban military is carrying out deadly attacks even as the civilian leadership is conducting negotiations in Doha.

However, optimists point out that the scene is not so grim. The Taliban has met the other Afghan groups. Two rounds of intra-Afghan talks took place in Moscow earlier this year when Afghan politicians, including ex-President Hamid Karzai, former commanders and civil society members, including women, met Taliban representatives.

The Taliban is confident about pushing the envelope because it is aware that no country can guarantee the implementation of any agreement. No country has the capacity to do it militarily. The US and Russia know this only too well.  In its former avatar as the Soviet Union, Russia had suffered a humiliating defeat at the hands of the Mujahideen (predecessors of the Taliban) in the early 1900s. The US is in a soup now and is eager to quit.

The US wants Pakistan to guarantee Taliban’s good behavior based on the belief that Pakistan has influence on the Taliban. But experience with militant groups all over the Third World shows that militant groups become adamantly independent and bow to no one, as soon as they become powerful .

The Taliban is, in fact, in a zero sum game. The choices for it are stark: it is either acquisition of total power or continuance of the fighting. Given the fact that the Taliban  has been brought up on a diet of Jihad, fighting to set up a truly Islamic state is a sacred duty for it – a duty for which no sacrifice is too much.

The US  is hoping to coax Pakistan and other countries to take up the responsibility of seeing to the implementation of any agreement reached with the Taliban. By dangling military and economic aid and even offering to mediate on the Kashmir dispute with India, the US is trying to coax Pakistan to persuade the Taliban to come to an agreement with it and implement it in letter and spirit.

As a follow up, the US could well ask Pakistan to be a guarantor of the agreement deploying troops if necessary. But it is doubtful if the Imran Khan regime will take up any such responsibility, given its current pre-occupation with economic development and fighting corruption.

Assuming that the US withdraws completely, and the Taliban does actually talk to the democratically elected government Kabul, many thorny and divisive issues will have to be thrashed out. These are: the question of the validity of the Afghan constitution, women’s rights, the Taliban’s own attitude towards elections and democracy and the fate of the twice-postponed  Afghan Presidential elections that are scheduled for September.

Modernized Afghans fear that sharing power with the Taliban could see a return to the group’s obscurantist interpretation of Islamic justice. They are concerned that various freedoms, notably women’s rights, could suffer. The Taliban had banned women from public life when they were in power in the 1990s. Their punishments included public stoning and amputations.