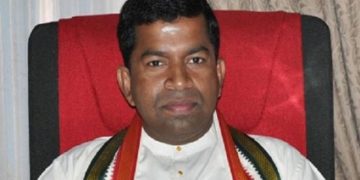 Colombo, January 13 (newsin.asia): The Batticaloa High Court on Wednesday released Sivanesathurai Chandrakanthan alias Pillayan, a Member of Parliament and former Chief Minister of the Eastern Province, after the Attorney General’s department said on Monday that it would not pursue the murder case against him.

The Court of Appeal had earlier ruled that there was no credible evidence to sustain the charge. The confessions were deemed to have been made under duress. In November 2020, Pillayan was granted bail.

Pillayan is currently head of the Tamil Makkal Viduthalai Puligal (TMVP) and a Member of Parliament from Batticaloa district in the Eastern Province. He was a child soldier of the Tamil Tiger rebel group. He was arrested in 2015 in the case relating to the assassination of Tamil National Alliance MP, Joseph Pararajasingham, in St.Mary’s Cathedral in Batticalao on December 25, 2005. The arrest was made on the basis of “confessions” made by two of Pillayan’s  lieutenants in the TMVP. But these were later deemed to be inadmissible.  He was let off on bail in November last year.

A day before his acquittal, Pillayan told this writer that he will resume his political work with a two-point agenda: (1) work for the economic development of the Eastern Province (2) safeguard provincial autonomy and provincial powers.

When Pillayan was Chief Minister of the Eastern Province from 16 May 2008 to 18 September 2012, he had earned a name for himself as a non-communal and development-oriented leader in a province where all three major Sri Lankan communities, Tamils, Muslims and Sinhalese, are equally represented. Those who met him in prison found him planning development schemes for his province.

His work as a non-communal development agent was appreciated by Basil Rajapaksa who was the Economics Development Minister at the center when Mahinda Rajapaksa was President of Sri Lanka. Pillayan hs been an ally of the Rajapaksas, though he has his own outfit, the TMVP.

Pillayan’s development initiatives had won him a wide measure of support among the people of Eastern Province, especially in his native Batticaloa district.

Journalist DBS.Jeyaraj writes that when the Local Bodies’ elections were held in February 2018, the TMVP contested eight Local Bodies, polled 42,365 votes and won 36 seats. In the parliamentary polls held in August 2020, the TMVP contested Batticaloa District with the imprisoned Pillayan as the chief candidate, to be Chief Minister if his party got majority.

Pillayan is expected to get a State Ministership in the Center as he is an ally of the ruling Sri Lanka Podujana Peramuna (SLPP). Since he was granted bail in November 2020, he has been attending parliament with the court’ s permission. He has also been functioning as co-chair of the Batticalao  District Development Coordination Committee along with the Eastern Province Governor Anuradha Yahampath.

If elections are held for the Eastern Provincial Council in mid- 2021, when the pandemic is expected to be less virulent, Pillayan could be a Chief Ministerial candidate.